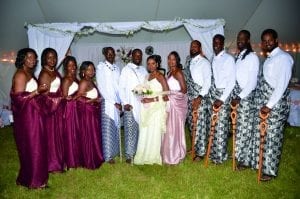 Weddings are by far the largest social gatherings in African immigrant communities. Participants relish spending time together, enjoying traditional rituals, dress, and manners, and sharing delicious food. Everything about weddings is spectacular and warms the hearts of those who attend. Even those who are not invited want to be there! In some African countries wedding ceremonies take days as everyone enjoys each other’s company and partakes in the festivities.
African people here in the USA drive or fly hundreds or even thousands of miles to be part of the weddings of family and friends. Others come all the way from Africa, Europe, Australia or elsewhere to participate. Here in Maine the average number of people who attend an African wedding varies between three hundred and five hundred people. The budget for weddings is large and runs between twelve and nineteen thousand dollars for an average wedding. For well-established people the amount spent is often much greater.
Weddings take serious preparation over a period of months. Committees and subcommittees meet regularly prior to the wedding to take charge of different tasks: decorations such as flowers; protocol such as arranging seating for invitees according to family or community status; housing for guests in volunteer homes in the community; transportation; fundraising. Money to help pay for weddings is raised across communities and throughout the country and even across continents. It is very common when someone has a wedding here in Maine to include friends and family members from Europe, Australia and Africa. These are all invited to come to the wedding and also to help support the wedding financially. There is a great flurry of ticket purchases, money transferals, and wedding expense outlays in the months before a wedding.Technology and social media make it easy to connect people from different corners of the world.
American friends who have attended African weddings say they are fascinated by the traditions and rituals associated with the wedding. If the wedding is Christian, the church service is long and often starts very late.Traditional exchanges between the families of the bride and groom in the reception area go on for a long time. Traditional dances are spectacular and entertaining. The groom’s family tries their best to cook the most delicious food possible to please the guests of honor – the family of the bride. Muslim weddings include religious rituals that are different from Christian rituals. For Muslims the religious component takes place in the home with a small gathering that includes the Imam. The Imam assists in executing the marriage contract. After this comes a lively community party. For all African communities the wedding goes on for hours or even days.
At this point in time there are very few mixed marriages here in Maine between Africans and Americans. If fact, mixed marriages between different African communities are also rare. Muslims may be reluctant to marry Christians, and vice versa, but it is also unusual for Africans from one culture to marry Africans from another. In the past, in most African communities, the marriage was arranged by parents, but these days brides and grooms decide for themselves who to marry. They do however still seek permission from both sets of parents. Usually the parents of the bride have a lot to say about the choice of a husband as they want to be sure their daughter does not suffer in marriage. One major difference between African and American weddings that persists is the tradition of giving a dowry to the parents of a girl. The dowry might be gold, money, animals such as goats or camels, or other gifts of value.
Neighbors of the family hosting a wedding will quickly notice a great deal of commotion around the house. They will see the intense movement of people coming in and out of the house and of vehicles parking all around the streets at late hours for a few days prior to as well as after the wedding itself. Some Africans have learned it is a good idea to inform their local neighbors about the upcoming wedding in order to avoid alarming or frustrating them by the unfamiliar movement of people in the neighborhood.
Marriages and weddings play an enormously important role in the life of all cultures, including contemporary local American culture. There is no one-size-fits-all when it comes to the formalizing of a couple. Ceremonies vary by numbers of people involved, expense involved, religion, traditions and rituals. Amjambo Africa! encourages our readers to learn about the marriage customs of other cultures. And please – if you have a wedding photo you’d like us to include in a future issue, send it to [email protected]