Country Focus : The Republic of the Congo 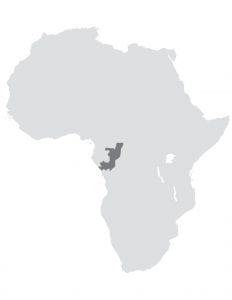 The Republic of the Congo, also known as Congo-Brazzaville (after the capital city of Brazzaville) or the Congo, is located in the Congo River Basin in Central Africa. Congo-Brazzaville is a beautiful country, boasting an abundance of natural and human resources. The Atlantic Ocean borders it on one side and five other countries share borders with the Congo. Congo’s area is 132,047 square miles, which means it is 3.7 times bigger that the State of Maine. The Congo has two major seasons, the dry season and the rainy season. It is hot and humid all year, with an average temperature of 25 degrees Celsius. July and August are typically the coolest months. The Congo’s population is 5,477,631 inhabitants, according to the most recent United Nations estimate. French is the official language, but many people speak multiple languages. There are an estimated 40 indigenous languages. The population is 90% Christian, with most either Roman Catholic or Protestant. The Congo is known throughout Africa for its music, dance, wooden statuary, masks, and other traditional handcrafts.

Bantu people are believed to have settled in what is now modern-day Congo-Brazzaville thousands of years ago during the great Bantu migration and expansion. The predominant ethnic groups included the Bakongo, who comprised the largest part of the population, and the Sangha, Teke, and Mbochi. Historians believe that pygmies occupied the country prior to the arrival of the Bantu. The Bantu overpowered the Pygmies and established the Bakongo Kingdom. The Bakongo Kingdom was well organized, with strong trade networks extending from the Congo River to the Atlantic Ocean. The Kingdom, with strong central leadership, was one of the greatest in the African continent during the 15th century.

Congo-Brazzaville gained independence in 1960 after many years of French colonial rule. Political unrest and power struggles plagued the country after independence, resulting in civil wars, coups, and assassinations. Since 1960, the country has had five leaders. These have mostly been dictators whose authoritarian regimes led to the rise of opposition leaders and a series of rebellious movements that have destabilized the country over a period of many years.

The economy of the Republic of the Congo is primarily based on agriculture, hunting, and industry. The Congo is the fourth largest oil producer in the Gulf of Guinea, and oil provides the main source of revenue for the government. Oil and timber are the country’s major exports and its most significant sources of foreign exchange. Minerals found in the Congo include potassium chloride, iron, gold, diamonds, copper, zinc, tin, uranium, bauxite, and titanium. The per capita GDP in 2017 was $1,654. Major agricultural crops include sugar cane, tobacco, oilseed, cocoa, and coffee, and most residents are farmers.

People from Congo-Brazzaville who live here in Portland, and who talked with Amjambo Africa, expressed serious concerns about the current authoritarian regime of President Denis Sassou Nguesso. President Sassou Nguesso is 76 years old and has held power for more than 33 years. According to our sources, a major concern is the mismanagement by his government of public funds. They say people in the country are socially and economically impoverished, even though the country boasts great natural resources. The disconnect between resources and income level fuels the continuous civil unrest.

Our sources decry the country’s poorly maintained infrastructure, with bad roads throughout the country; the inadequate health system, with many casualties each year from malaria and other treatable diseases; the unemployment rate in the Congo, which is over 10%, with 36% of the population living in dire poverty; and the muzzle on freedom of expression, with opposition party members too often targeted, and sometimes killed. For example, ex-army chief and opposition presidential candidate Jean-Marie Michel Mokoko was sentenced to 20 years in prison after being accused of trying to stage a coup and undermining internal State security, after he refused to accept the results of 2016 elections, questioned the results, and called for civil disobedience.