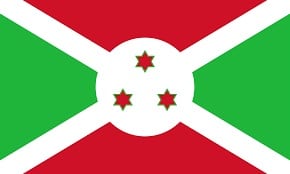 ndi is a landlocked country that sits at the intersection of East Africa and Central Africa. The country’s largest city is Bujumbura, which was the capital until 2018 when Gitega became the capital. One of the smallest countries on the continent, Burundi has an area of 27,834 sq. km., which makes it one-third the size of Maine. The population is 11,437,509, according to the latest United Nation estimates. Burundi is densely populated, and most people live by farming and grazing livestock. With a median age of 17.6 years, the population is very young and life expectancy is only 58 years for men and 62 for women. The Abahutu tribe comprises 85% of the population, the Abtutsi another 14%, and the Abatwa the final 1%. All three tribes share the same culture, as well as the Kirundi language; French is the official national language. Burundians are 75% Christian, with 20 % practicing indigenous religions, and a small minority are Muslim. Traditional Burundian dance and drumming are famous around the world.

Hutu people settled the region in the 1300s, followed by Tutsi in the 1400s. King Cambarantama became the first king in 1680. John Hanning Speke and Richard Burton, British explorers looking for the source of the Nile River, passed through Burundi in 1858. After overcoming strong resistance, Germany colonized Burundi in 1899 with the help of tactics that included the introduction of lethal diseases. Belgium successfully took Burundi from Germany in 1916, during the First World War. Both Belgian and German colonizers ruled Rwanda and Burundi as a single colonial entity known as Ruanda-Urundi. Prior to the colonial era, Burundi and Rwanda had never been ruled together.

Burundi became independent on July 1, 1962, and the Ruanda-Urundi union was dissolved. In the first years after independence, Burundi was a constitutional monarchy created by King Ganwa Mwambutsa IV. He appointed an equal number of Hutu and Tutsi in his government and named Pierre Ngendadumwe, a Hutu, as his prime minister. In 1965, Pierre was assassinated, and after this, conflict between the Hutu and Tutsi broke out, leading to a long period of civil unrest and violence that seriously weakened the country’s social and economic fabric. In 1966, General Michel Micombero became the first president and ruled as a dictator for 10 years. In 1976, Colonel Jean-Baptiste Bagaza ascended to power by means of a bloodless coup. He led a Tutsi regime. In 1987, Major Pierre Buyoya overthrew Bagaza, and in 1988, civil unrest and violence broke out between the Hutu opposition and the Tutsi-dominated army. More than 150, 000 people died, and tens of thousands fled to neighboring countries.

In 1991, President Buyoya signed a constitution that created a multiethnic government and parliament, and this resulted in elections that brought President Melchior Ndadaye – the first Hutu president – to power. In October 1993, President Ndadaye was assassinated by members of a faction of the Tutsi army. This disastrous event plunged the country into a civil war between Hutu and Tutsi, several regime changes, and several presidents including Cyprien Ntaryamira, who died along with the Rwandan president in a 1994 airplane crash. He was succeeded by Sylvestre Ntibatuganya, then Pierre Buyoya returned to power in 1996, followed by Domitien Ndayizeye, and then Pierre Nkurunziza, who became president in August 2005. Under his leadership, the country was relatively peaceful until 2015, when he disregarded term limits and sought reelection for the third time. The international community viewed the 2015 elections as illegal, and many countries cut their aid in protest. President Pierre held onto power after the elections, but another civil uprising followed, leading to more killings and more refugees fleeing the country. Some of these displaced people have made it out of Africa to safety. In African countries that are neighbors to Burundi, hundreds of thousands of Burundian refugees live in small tents in vast refugee camps and receive monthly food rations from the United Nations and other non-governmental organizations (NGOs).

Catholic Charities Refugee and Immigration Services has helped 140 Burundians resettle here in the last five years, though our Burundian-American sources say the total number of Burundian-Mainers is at least 1000. Our sources expressed great concern over the current political, social, and economic situation in Burundi. They say that conditions within the country continue to deteriorate. Most countries have not re-established aid relations, leaving Burundi now solely reliant on Chinese and Russian aid. Our sources say the people of Burundi are living in a state of despair. Since the last election cycle, people who have spoken up against the regime have been threatened with serious harm, and some have been tortured. Numerous disappearances have been reported.

Our sources explained that Red Tabara, an armed group that formed after the 2015 election and is based in eastern DR Congo, is attempting to destabilize and bring down the current government. They also shared their great concern about a possible conflict brewing between Rwanda and Burundi. Burundian Mainers say an outbreak of war between the two countries would be disastrous for the entire region. The next elections are scheduled for 2020 and the current president, Pierre Nkurunziza, has declared that he will not seek reelection. Our sources call on the international community to help the suffering people of Burundi by promoting peace and reconciliation.