Cooking with Nadine Pembele | Fumbwa, a popular Congolese stew made with foraged greens 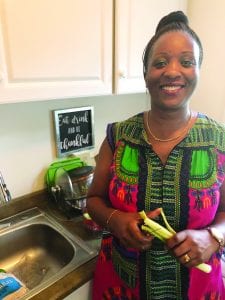 Nadine Pembele was born in the Democratic Republic of the Congo (DRC) but when she was six years old, she moved to Belgium with her stepmother, to reunite with her father. She lived in Belgium until she was 17, then returned to DRC and lived with her biological mother. While in Belgium, she learned to cook European style. By the time she returned to DRC, everyone around her already knew how to cook, so she watched others and picked up tips, gradually learning on her own how to cook food from her home region. She considers African food healthier than American food because meals are balanced, cooking is from scratch, and very little is fried in oil.

“I love cooking. It brings out my creativity,” she said. “In Africa we don’t use measurements, and we add ingredients to taste, which allows for personal preference – and in the U.S. I have to be creative in may ways. For example, to cook fumbwa, I order the catfish from my brother-in-law, which takes two or three weeks to get here, because it’s too expensive for me to buy it from African shops in the community here. It’s very special for us now when we eat it.”

Nadine and her husband have lived in Maine since 2016. She is employed at University of Southern Maine as an Administrative Specialist CL3, where she provides support to two departments. Before arriving here, she and her husband had never heard of Maine. But because of political persecution, she left a very good job as a marketing manager in DRC in exchange for the uncertain life of an asylum seeker. When they first arrived, she had no idea what to do. A pastor introduced Nadine to Micky Bondo, who encouraged her to attend In Her Presence classes on Saturdays, which she did. Nadine said she felt safe and supported by the program, and it gave her a sense of purpose and hope about her future in Maine. Both IHP co-founder, Claudette Ndayininahaze and Micky Bondo, felt almost like mothers or big sisters to her. “I discovered they were really sincere, true people,” Nadine said.

At first, Nadine’s English was not as strong as it is now, and her first role at IHP was Facilitator, helping others whose language was less advanced than her own. After one year, In Her Presence decided to open a second site, and the founders asked Nadine if she wanted to coordinate that program, and do the necessary outreach to recruit new moms to attend classes and learn English. “We worked well together, and I got on well with everyone,” Nadine said.

“I love cooking. It brings out my creativity,” she said. “In Africa we don’t use measurements –  we add ingredients to taste – and in the U.S. I have to be creative. For example, to cook fumbwa, I order the catfish from my brother-in-law, which takes two or three weeks to get here, because it’s too expensive for me to buy it from African shops in the community here. It’s very special for us now when we eat it.”

Please note: the fumbwa in this recipe should be in dried form, rather than fresh, as in this photo.

Directions:
Soak the smoked, dried fish in water overnight or for at least two hours. Then drain and thoroughly rinse the fish. Boil for 10 minutes or until tender.
Meanwhile, prepare the sauce. Boil the dried fumbwa leaves in water for about five minutes, or until tender. Add the peanut butter and cook for another five minutes.
In a separate pan, sauté diced onions, minced garlic, diced fresh tomatoes, and seasonings in oil until vegetables are soft.
Combine fish and sauce, top with oil, and simmer over low heat.
Serve with ugali, fufu, or chikwange. All three are made of cassava flour and accompany stews and other soupy dishes.