The Asylum Seeker Work Authorization Act, which was introduced by Congresswoman Chellie Pingree on May 16, was referred to the Subcommittee on Immigration and Citizenship on June 26.  The bill has seven original cosponsors including Representatives Alexandria Ocasio-Cortez, Ilhan Omar, Jim McGovern, Jan Schakowsky, Veronica Escobar, and Jesus Garcia. Representative Mark Pocan signed on as a cosponsor on June 19.

The bill’s passage would positively impact Maine’s economy in two ways. Currently, the law reads that an asylum seeker has to wait 180 days after filing for asylum before he or she can be employed. Congresswoman Pingree’s bill would reduce the waiting period to 30 days. This would allow asylum seekers to become self-sufficient much more quickly, decreasing their reliance on General Assistance. Further, the long waiting period in effect at this time is limiting the access employers have to an able-bodied workforce very much in need of work, at a time when the U.S. is experiencing historically low unemployment levels.

The current law requiring the 180 day waiting period dates from 1996. Congresswoman Pingree’s bill makes no changes to law or regulations relating to the asylum process itself. The bill does not impact in any way how decisions are made as to who does or does not receive asylum. The bill only impacts the ability of the petitioner to work while awaiting a decision on their asylum claim.

As of now, the extended waiting period will prevent the asylum seekers who have recently arrived in Portland from working for many months to come. While they wait, they will have no choice but to be dependent on the generosity of others. Yet these able-bodied – and, in many cases, highly-trained – workers would like to be employed. They are ready to work hard. Passage of the Asylum Seeker Work Authorization Act would allow them to go to work while they await a decision on their asylum petitions. 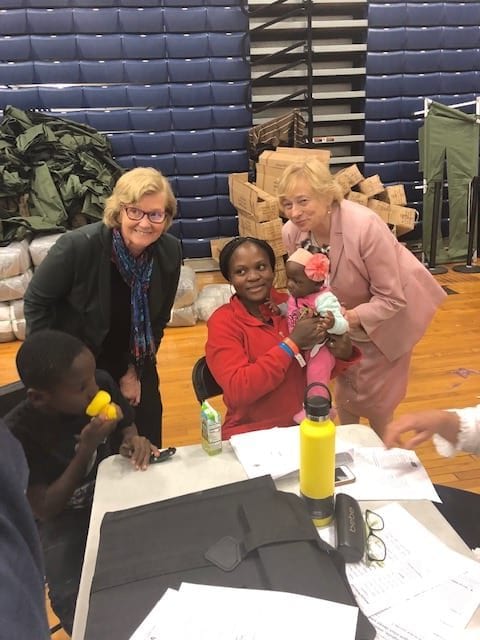 Congresswoman Pingree and Governor Mills tour the Expo Center, which is housing asylum seekers who must wait 180 days after their asylum claims are filed to work, under current law.