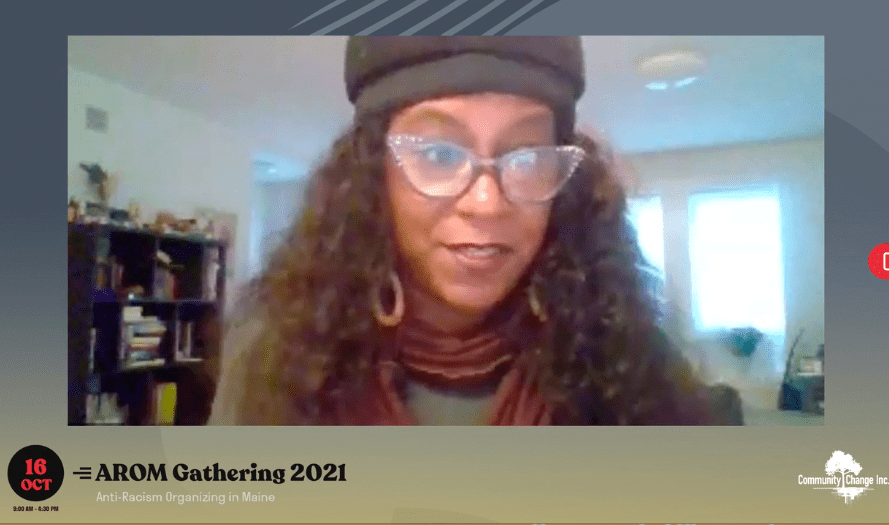 On Saturday, October 16, Community Change, Inc. held an online event entitled “Anti-Racism Organizing in Maine.” Its purpose was to ground current New England anti-racism work in history to ensure the work is effective. Over 150 people attended from different states in New England. In addition to hearing from speakers, attendees broke into region-based groups to discuss acting locally.
Kate McMahon, a museum specialist at the National Museum of African American History and Culture in Washington, D.C., with a doctorate in history from Howard University, gave the keynote speech on the role of enslavement in Maine’s history. “Maine’s statehood only gained support because of the crisis around adding the new territory of Missouri as a slave state,” she said. Slave ships built in Maine carried over 20,000 Africans from Africa to Cuba, between 1850 and 1865 alone. For more information on this history, McMahon recommended attendees look into Atlantic Black Box, a “historical recovery project” focused on uncovering New England’s involvement in the slave trade.

Next, Ambassador Maulian Dana and Rep. Rachel Talbot-Ross spoke. Dana is a representative of the Penobscot nation, and Talbot-Ross is a third-term state representative and board president of Atlantic Black Box. Both are members of the Permanent Commission on the Status of Racial, Indigenous, and Maine Tribal Populations.

Dana described a bill in the upcoming state legislature, LD 1626, which would address a number of problems with the 1980 settlement between the U.S. government, Maine’s government, and Maine’s tribal nations. Because of that settlement, Maine tribes are treated as towns or cities rather than as independent nations. As a result, they do not benefit from over 100 federal laws concerning tribal sovereignty. The ambassador noted that Gov. Janet Mills has expressed opposition to the bill but has not given specific reasons for her opposition, other than characterizing the bill as doing too much at once.

Talbot-Ross expressed concern that without facing the truth of United States history – the theft of Indigenous land and the enslavement of Africans – moving forward would be difficult, if not impossible. She emphasized that it is not enough to attend rallies and put out statements, and she urged attendees to contact Mills to express support for LD 1626.

Wall reminded attendees that slavery was a fact of life in New England “from day one,” and that by 1723, 25% of Maine households held enslaved people. She also pointed out that “we live with what has been recorded … [but] people have worked very hard not to record it.”
Simpson Lutts admitted that currently museums are generally “institutions of White people for White people” but expressed hope that more historical societies would get involved with sharing more accurate, if uncomfortable, local racial history.

Sayre displayed a contract for an indentured servant who would receive food and livestock at the end of their contract, and an advertisement for slaves, and invited attendees to consider what life would look like for the people referenced in the documents. She hopes schools will develop more social studies programs that give students access to primary documents to do their own research on racism.

In the afternoon was a panel entitled Voices of Change, Visions of Justice. Mars Marvray and Mariana Marvray spoke on behalf of Black POWER (Black Portland Organizers Working to End Racism), where they serve as co-directors. Their work includes examining how diversity, equity, and inclusion programs look during a pandemic. They emphasized the need to work locally and reminded attendees that anti-racist work must be done with a lens of accountability.

Darryl Shepherd, a project facilitator, and Donkell Bolton represented Maine Inside Out, an organization that works with formerly incarcerated people using transformative justice and methods from the theatre of the oppressed approach to heal relationships and communities, focusing on justice rather than punishment.

Leyla Hashi and Skye Gosselin spoke on behalf of Maine Youth Justice, an organization focused on closing Long Creek Detention Center. Hashi stated that six children at Long Creek reportedly have been restrained in the same manner as George Floyd. Maine spends $700,000 per child for incarceration, she said, compared to $15,000 spent per child for education. Gosselin noted that despite multiple attempts to contact Mills on the topic of the conditions at Long Creek, the governor has never responded to her.

Co-founder Desiree Vargas and Program Manager David Patrick made a presentation about their Racial Equity and Justice organization. They offer trainings and an online course on diversity, equity, and inclusion. Vargas pointed out that many people in Maine are working in isolated groups, and spoke about the importance of connecting and working together.

One question for the panelists was how they balance hope for the future with current struggles. In answering, Patrick asked, “Why can’t we be idealistic when it comes to people’s dignity?” Vargas added, “Dreams don’t work unless we do.”

In closing, Atlantic Black Box Executive Director Meadow Dibble reminded attendees, “It is not by accident that our dominant regional narrative is so skewed and partial,” and that the moral arc referenced by Rev. Dr. Martin Luther King Jr. does not bend toward justice without action.

Finally, Shay Stewart-Bouley, executive director of Community Change, Inc., noted that truth-telling and relationship building are essential parts of anti-racism work. In a final message, she said, “You cannot be a true ally if you cannot sit through discomfort.”
Community Change, Inc., will host a conversation across age, race, and class entitled “Tell Me the Truth” on November 11.