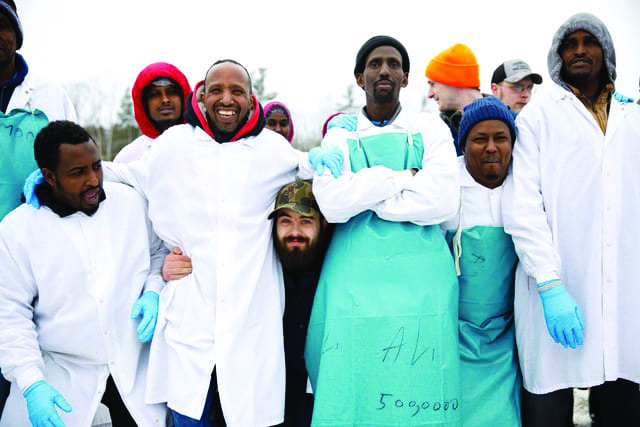 Ten years ago, after working for a number of years on farms owned by others, Ryan Wilson decided the time had come to set out on his own. He’d been involved in provisioning restaurants, so he chatted with some chefs he knew, determined to figure out what niche he might be able to fill. When he learned there was an inadequate supply of ducks on the market, he bought six ducks and learned how to take care of them. The following year, Wilson bought 1,500 ducks. Eventually Common Wealth Poultry’s flock grew to the point where he needed the help of reliable employees.

“Some of the most important work in this country and around the world is creating food for people to eat, but it is also the hardest,” Wilson said. “It was really hard to get people to do this type of work.” Wilson said. So he reached out to the Lewiston Career Center, which connected him with a couple of people who were interested in the job.

“They were the first two people we hired from the New Mainer community,” Wilson said. “They were really great people. I just loved them and love working with them.” In fact, all of Common Wealth Poultry’s employees have come from recommendations made by one of those first two employees. Wilson said they no longer have to advertise for employees – word of mouth works fine. He currently employs 35 New Mainers from the Somali Bantu community.

“We are the antithesis of the modern poultry industry, which hires undocumented laborers and pays them an unfair wage,” Wilson said. “We want to create an environment where everyone is working together, and not having all of the divisive rhetoric that we have in the country right now. We are just human beings working together to solve problems and make a living.”

Wilson’s attitude has fostered a family-like relationship between all of the employees at Common Wealth Poultry. Wilson sells chicken to the employees at low cost, who then take it home to share with friends and family. The employees are family-oriented and look out for one another, sometimes bringing in old baby clothes and hand-me-downs for others who have a need for them. And they love to celebrate each other’s important life events, such as receiving a driver’s license.

Sometimes everyone grieves together as well. Tragically, Wabah Sahal Salat and Shariffa Shale Ali, two employees, died in a car accident on their way to work in October 2019. After hearing the news, although it was their busiest season, Common Wealth shut down for three days to grieve the loss of their friends. “We all came back and were a little bit stronger and closer,” Wilson said.

There have been struggles over the years. Wilson says that adjusting to the Somali Bantu community’s culture was a learning curve for Common Wealth Poultry. According to Muslim tradition, prayer is performed five times a day, with some of the times falling during the workday. So, at Common Wealth, time is provided for prayer breaks.

“Still, when you’re in production, and you have a large number of people go off to pray, that presents some hardships,” Wilson said. To overcome this, the employees helped find a solution: a few people pray at a time, while others continue to work. At employee request, a few years ago Common Wealth went completely Halal. This means that the animals are slaughtered in accordance with Muslim law. Each chicken or duck is prayed over before being hand slaughtered. “The answer to overcoming cultural differences is making it functional for both of us, and we succeed.” Wilson said.

Wilson believes that bridging the gap between New Mainers and long-time residents is important in a state that has an older population and new, young workers are vital to the economy. Having workers come in from out of state and even out of country is something that should be celebrated, he says. “They are an isolated community that is misunderstood,” he said. “People are afraid to hire people who don’t speak English and are different from them. But I hope in the future we can start to bridge those gaps better.”

Wilson is currently working with legislators in Maine to provide funds for programs for employers to learn how to work with culturally different employees. “Businesses that need employees but don’t understand how to train them when they don’t speak English. There should be programs to bridge that gap,” he says.