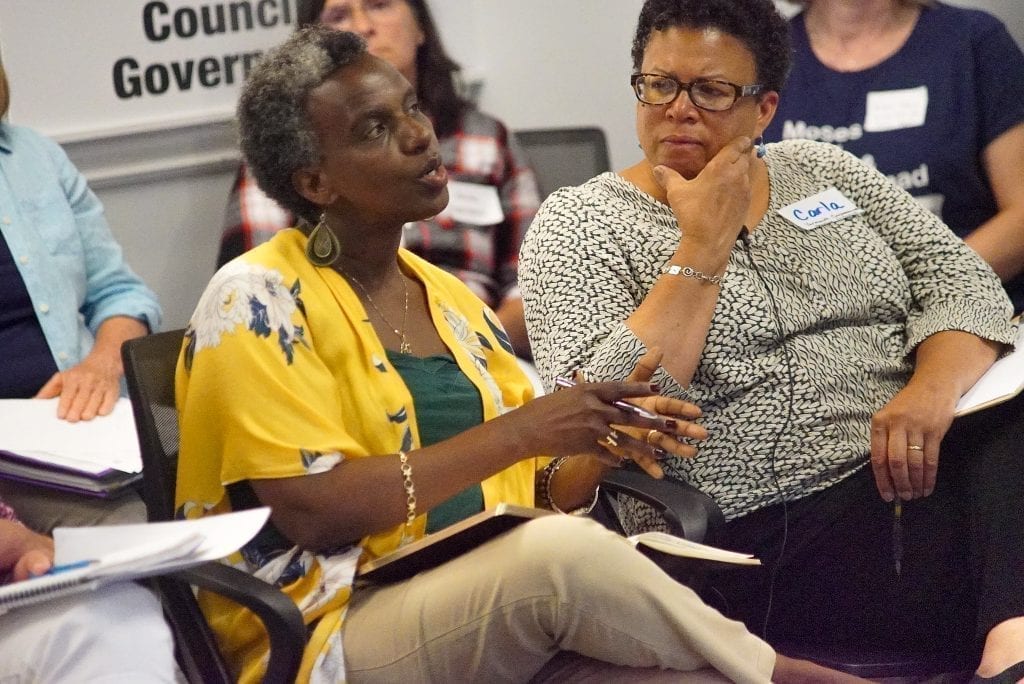 With an August 15 move-out deadline looming due to prior contractual obligations at the Expo Building, and an affordable housing crisis that has been intensifying for years throughout Maine, Portland city and community leaders have drawn together a strong coalition to locate housing for the asylum seekers who began arriving in Maine on June 9.

Kristina Egan, Executive Director of The Greater Portland Council of Governments (GPCOG), convened the coalition. Ms. Egan said her staff has pushed other projects aside to focus on this high-profile, public emergency.

“We’ve been happy to do that,” she said. The group is launching “Host Homes,” one important arm of an overall housing plan that also includes moving some of the approximately 70 families into rental units in the next few weeks, as well as when seasonal housing stock traditionally opens up at the end of the summer season. Host Homes will match asylum seekers with host families in the Greater Portland region, and provide short-term housing for some families.

“We began our program July 19 with one host family, as a pilot, to get some practice working as a team before fully rolling it out ,” said Tom Bell, Public Information Officer at GPCOG.

Everyone involved in Host Homes is committed to ensuring the well-being of both hosts and guests. The website includes an application to be completed by potential host families, as well as a list of expectations that host families must meet – such as guests having full access to a kitchen. Cultural training opportunities for both host families and asylum-seeking guests will be provided. Claudette Ndayininahaze and Micky Bondo, co-founders of the organization In Her Presence, as well as other immigrant leaders, will contribute their expertise to this cultural training.

“We have to make sure the families who are moving out of the Expo have some agency into where they are going, that the host families know what to expect, and that the asylum seekers know how to be guests in American homes,” Ms. Egan said.

Heather Dallas, who has worked extensively with more than 800 asylum seekers in Portland over a period of five years, emphasized that cultural orientations will be important for the success of the Home Hosts program. She noted that people live in houses differently, depending on their backgrounds, and that cultural orientations with very concrete examples would help families get along when living under the same roof.

Ms. Ndayininahaze agreed that cultural orientations are key to the success of Home Hosts. In Her Presence, Catholic Charities, and the City of Portland have already begun leading orientations. Ms. Ndayininahaze emphasized that small-group orientations work best. The plan is to “follow the families as they move into the community to continue cross-cultural support, to involve schools and neighborhoods, in order to build relationships and trust. Resources is one thing, but the social component is crucial,” she said. Ms. Ndayininahaze added that English language training is beginning, and that 75 people had signed up for classes as of July 19. 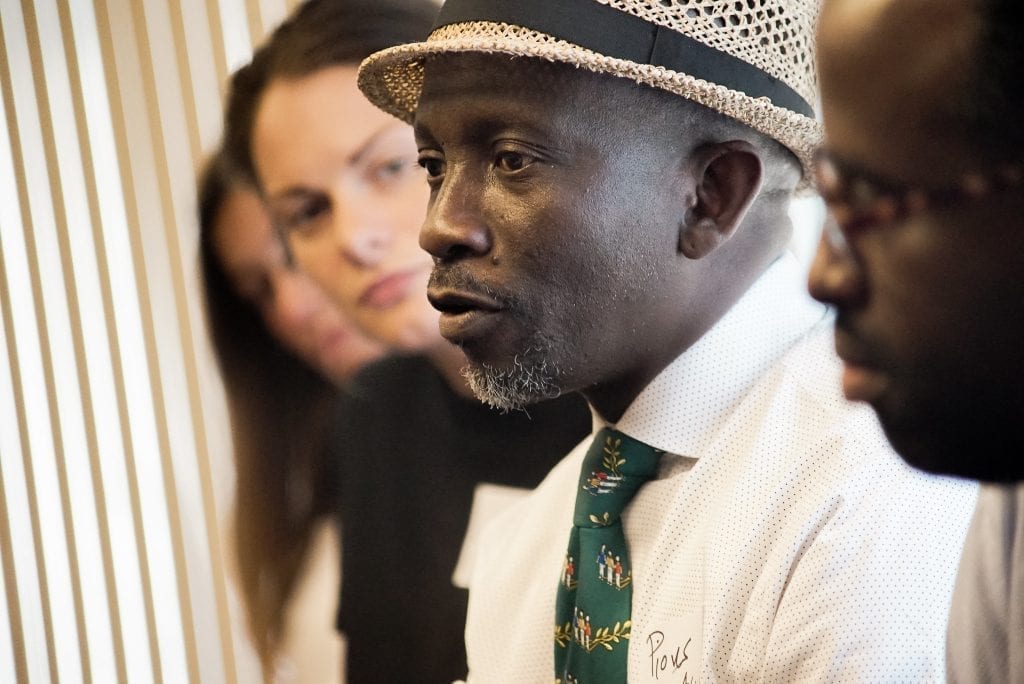 The Greater Portland Council of Governments has already received 115 inquiries from people wanting to welcome into their own homes the asylum seekers currently housed at the Portland Expo Building – and that was before the Home Hosts website had even launched. Some of these inquiries have come from rural areas of the state, but most are from families in the Greater Portland area. At the moment, the system will prioritize host families in the metropolitan Portland area, due to access to public transportation, proximity to specialized legal help directed at filing asylum claims, availability of services, and the social network that surrounds the African community in Portland, among other reasons.

Nsiona Nguizani, President of the Angolan Association of Maine, said that a big challenge for asylum seekers can be “isolation, and fear of the unknown. This is partly why the immigrant community is working to establish a system that will eventually work statewide to address the social challenges connected with being an asylum seeker in a rural state.” This is another reason that, until this system is in place, immigrant leaders are prioritizing placement of the families from the Expo Building in the Greater Portland area.

While hosting asylum seekers with families in rural areas is not in the plans at this time, towns and cities outside of Portland may want to play a role in long-term solutions. Portland City Manager Jon Jennings said, “Cities and towns in Maine would be short-sighted to not view this as an opportunity to strengthen Maine’s economy and bolster its workforce. These families are here legally, they are highly skilled and trained, and they are ready to make a contribution to their new community.”

CIEE will conduct an initial review of all applications from potential hosts for the Home Hosts program. This initial review will include a standard background check. CIEE will then provide information to the immigrant leaders, who will match asylum-seeking families with qualified hosts.

On July 18, Governor Mills announced that she has relaxed restrictions on General Assistance eligibility. While the funds will allow many asylum seekers access to vouchers for housing, buying food, and medications, the housing shortage remains, and therefore so does the need for temporary housing.

“The new (GA) money does not change the need to find temporary housing,” Mr. Bell said. “There is a shortage of housing in the region. It will take time to find permanent housing for everyone at the Expo. The temporary housing will be needed to provide shelter for families as the city, Avesta Housing, and other partners locate adequate permanent housing for asylum seekers.” 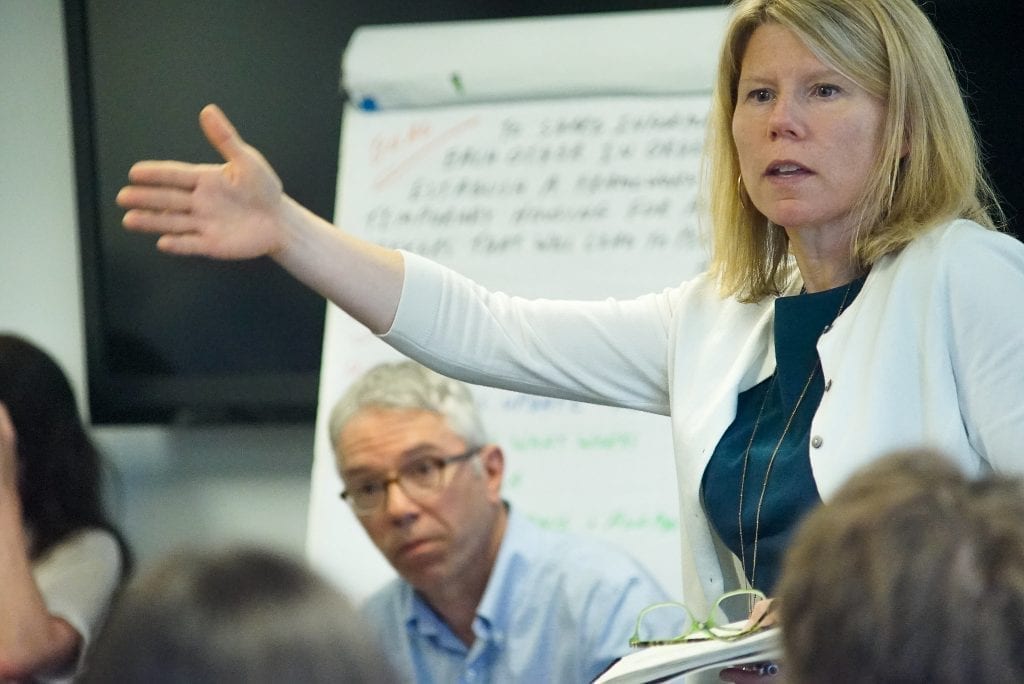 Dana Totman,  President at Avesta Housing, emphasized that finding long-term housing solutions for the asylum-seeking guests is challenging.“We already have over 2000 people on a waitlist for housing. If it was easy to find housing in neighboring cities we wouldn’t have 2000 people on our list.This situation shines a light on the affordable housing crisis that exists in Maine,” said Mr. Totman. He noted that “as soon as an asylum seeker is allowed by law to work, they do. Very quickly we see asylum seekers move from having no income to becoming fully employed, earning an income, and giving back to the economy. It has not been our experience that people are here for a handout.”

Sherrin Vail, Board president of Maine Real Estate Managers Association, agreed that the housing crisis in Maine is acute and has been building for years. “We’ve asked ourselves for years how to deal with this. There is no quick fix. We must build more affordable housing.”

“This is a great opportunity for Maine,” Ms. Egan said. “These people are resilient, talented. It is well known that immigrants build businesses and contribute wealth wherever they settle. And we need to crack the housing nut. Maine needs all kinds of newcomers – asylum seekers, as well as people from Massachusetts, people from California – and we need affordable housing in Maine to make that possible.”

Nsiona Nguizani spoke for many when he said, “Our life doesn’t make sense until we decide to share it with others. Being part of the team welcoming the asylum seekers is one of the best things that has happened in my life.”

To find out more about becoming a host family, visit: https://www.host-homes.com