Bikes for all Mainers 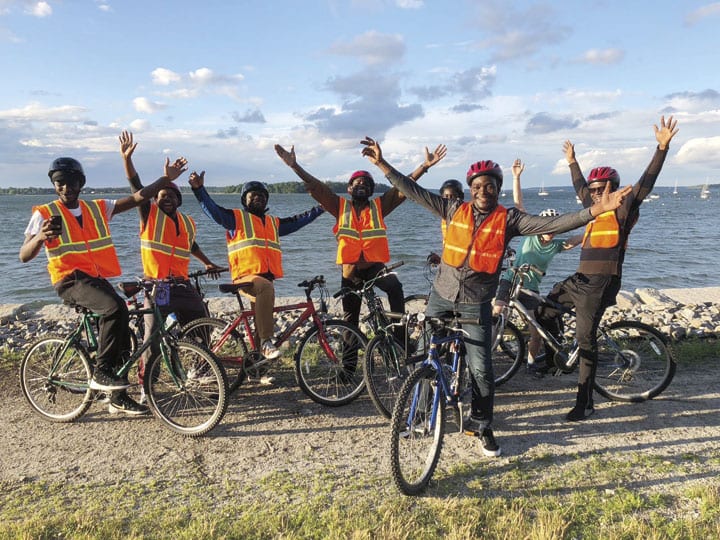 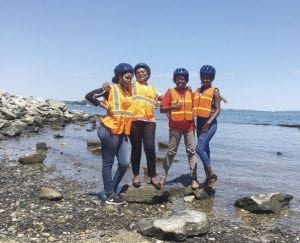 4 women learned to ride a bike during the Bikes for All Mainers program, completed the final ride, and earned bikes to ride home and keep! Photo by Ainsley Judge

Bikes for All Mainers – a free program for adults seeking affordable transportation in Portland – is about to kick off its 2019 season. Taking place at the Portland Gear Hub, the program is provided in partnership with the Bicycle Coalition of Maine. Students participating in the program learn skills in basic bike maintenance and traffic awareness. In addition, those who complete a six-hour course (two sessions of three hours each) earn a fully functional, refurbished bicycle as well as a new helmet with safety accessories.
Bikes for All Mainers serves as a strong example of what can happen when an individual recognizes a local need and enlists non-profit organizations to join forces to address that need. Five years ago, Nathan Hagelin realized that many newcomers to Portland were either overspending on transportation, or walking unreasonable distances to get to work, English classes, social service agencies, and other destinations, all of which often were located in different parts of the city. He reached out to Jim Tassé, assistant director of the Bicycle Coalition of Maine (BCM), for help. With help from long-time BCM collaborators Erik West and Shannon Belt, Jim worked to source and recycle bikes that could be provided to Portland area newcomers as part of a “how to ride bikes in traffic” program. Launched in 2014 as “Bikes for New Mainers,” the name was changed to Bikes for ALL Mainers in 2017 to acknowledge the fact that many folks in Maine besides immigrants could benefit from the program. That same year, the Bicycle Coalition began talking with Portland Gear Hub Shop Manager Ainsley Judge about shifting some program functions to the Portland Gear Hub.
Now the Portland Gear Hub, with support from the Bicycle Coalition of Maine, administers the program, sources and repairs the bikes used, provides a location for the training, and contributes staff time to implement the program. Currently entering its fifth year, the Bikes for All Mainers program continues to team the Portland Gear Hub with the Bicycle Coalition of Maine to work on the transportation challenges faced by many Mainers, new and old, in the Portland area. The program encourages a healthy, physically active lifestyle, helps reduce pollution in the city, and teaches bicycle riders the skills to share the road safely with motorists.
Thanks to new funding from Bangor Savings Bank and continued funding from the Bicycle Coalition of Maine, the program will serve 50 students this year – up from 36 last year. The 2019 season kicks off April 29 and continues through early August. Sessions take place in classrooms at the Portland Gear Hub Bike School, 85 Anderson Street, Portland, as well as on the road. Mainers wishing to participate must be 18 years of age or older at the time of the class, demonstrate an ability to ride a bicycle, and return a completed application to the Portland Gear Hub, 155 Washington Ave before the first class. The program application is available at the Portland Gear Hub or online at: https://portlandgearhub.org/bikes-for-all-mainers/