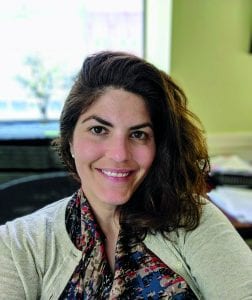 President Joe Biden has proposed sweeping legislative changes to U.S. immigration laws in a bill released February 18. The most important of these proposals is an eight-year pathway to citizenship for 11 million individuals without status, according to Julia Brown, advocacy and outreach director at Immigrant Legal Advocacy Project (ILAP). “That would be a huge deal, if it were to pass, because that would bring so many people out of the shadows and remove that fear and stress that many families experience every day.” The 353-page bill contains numerous provisions that ILAP calls very important. Biden has said he is willing to break down the bill into separate pieces of legislation. But that doesn’t negate the possibility of the legislation passing, as a whole.

Maine Immigrants’ Rights Coalition Executive Director Mufalo Chitam emphasized the stress that immigrant communities had been experiencing. “What our immigrant population went through during the Trump administration was that uncertainty of ‘What am I going to wake up to?’ ” A major worry was “Am I going to be sent back?” Biden, she said, basically campaigned on the platform of “I’m reversing everything that this guy did.” He already has reverted to the 2008 naturalization civics test, one that had been replaced in December 2020 with a much more difficult one. “We thought [the Biden administration] could do it, but we didn’t think they would do it this quickly,” she said.

Another notable point is that previous attempts at immigration reform have traded more money toward border security for the proposed changes. This bill doesn’t do that. “So it’s not criminalizing immigration more, in exchange for a pathway to citizenship,” said Brown. “Overall as a message, this is a very well-intentioned bill that shows a vision of welcoming people into the country who happen to be from somewhere else. And we’re not going to beef up enforcement in response.”

The relief is familiar. “We went through this when we were changing administrations here from [former governor Paul] LePage to the new [Janet Mills] administration,” said Chitam. “Just the sense of – whoosh! – not fearing that your benefits are going to be taken away.”

ILAP was encouraged by Biden’s first executive order to stop deportations. Immigration and Customs Enforcement (ICE) uses “immigration enforcement priorities” to determine whom they’re going to pursue and arrest. Former president Barack Obama had prioritized noncitizens who committed serious crimes; Trump did not have similar priorities. “So anyone who was here without status or even with a green card, who had a crime in their past, were priorities. This made the immigrant community feel unsafe. One of Biden’s first actions was to put priorities back in place,” Brown said. He issued a moratorium on deportations, but a judge recently blocked this from going into effect. Brown emphasized that Biden can and must do more to decriminalize immigration. “This court order does not prevent the Biden administration from exercising discretion and choosing not to deport people and separate families. We are disappointed in the continued deportations under the Biden administration’s continued use of deportations during its first month, and urge President Biden to listen to immigrant communities and halt deportations immediately.”

Senator Angus King also is pleased by the changes. “President Biden’s administration has already taken action to reverse some of the most harmful immigration policies of the Trump presidency, including ending the Muslim ban and family separation policies, reforming ICE enforcement procedures, and better protecting DACA recipients,” he said. “We should note that our country – and the state of Maine in particular – needs more people, including immigrants. Whether from Florida or France, Virginia or Vietnam, our nation needs more people in order to keep our economy strong as older workers retire and younger ones move away.”

ILAP’s website includes a scorecard of reform priorities, with check marks on successes and links to changes that the Biden administration has made or started, to date. An executive order raised the refugee admission ceiling. Rebuilding the asylum system has begun via a February 2 executive order that set up a task force to reunite separated families; agencies are examining both the COVID-19 health exclusion and the practice of deporting asylum seekers to a third country, and new enrollments in the “remain in Mexico” program have been suspended.

Another ILAP priority is protecting survivors of domestic violence, trafficking, and other crimes. Biden has rescinded a Notice to Appear memo that allowed survivors of these crimes to be deported. He also has directed the Department of Homeland Security (DHS) to “preserve and fortify DACA,” or Deferred Action for Childhood Arrivals.

Brown cautioned that while Biden can reverse some of the former president’s executive actions, real reform will require legislation in Congress. That is a more lasting solution, and prevents every president from changing practices that were implemented by a previous one. The Trump administration often made changes through their interpretation of existing laws. “Anywhere there was wiggle room in the law, he maxed it out or interpreted it in a way that sometimes a court found was not lawful,” Brown said. “For example, a statute says an asylum seeker cannot obtain a work permit prior to 180 days,” after filing for asylum, so the Trump administration was able to double the waiting period for asylum seekers.

Toward restoring family reunification, Biden has ended the so-called Muslim Ban and the ban on immigrants from certain African countries, and directed agencies to review the 2019 “public charge” rule that amounts to a wealth test for immigrant families. “The bill would do a lot for family immigration, for people who are already in this process and have applications pending, by trying to end backlogs and wait times that keep families separated,” Brown said. “A lot of provisions would change people’s lives and reunite families.” The bill also would prevent future presidents from banning people based on their countries of origin. It contains provisions to improve the court system, reduce the backlog, give judges additional training, hire more judges, and provide free lawyers to children. “No one [in immigration court] currently has the right to a government-appointed lawyer now,” she said.

Detention is another ILAP priority. “We want people released from detention. Start with the most vulnerable because of COVID, but we firmly believe that there are other, community-based alternatives,” Brown said. “The argument we hear over and over in favor of incarcerating immigrants is that otherwise immigrants will disappear, and that argument is especially used for asylum seekers. However, new data shows that 96% of individuals represented by an attorney attended their court hearings, and overall, 83% of immigrants not in detention attended all their court hearings. The data also shows that of those who did not attend a court hearing, many never received notice of the hearing, or faced hardship in getting to court.”

MIRC’s Chitam cautioned said, “The top changes, but it’s the same system, folks going to the same place to do their interview with the same people. The advocates sit back and say, ‘You are all set.’ But the folks who are in there, those who have made those decisions, they have been able to get away with doing even more damage because there’s no focus on immigation. Everyone just thinks, ‘Oh, everything is great.’ Decision making usually stays the same, regardless of administration. They tend not to be in the spotlight, so they’re able to get away with decisions that have affected countless members of the population we serve, even when the administrations change. We can’t relent, just because there’s a change of administration at the federal level.”

While Biden has already kept some of his promises about immigration, MIRC, like ILAP, is paying more attention to policy changes than to promises. “One of the things we’ve learned, even prior to the Trump/Biden administration change … is that we, as advocates, don’t relent. The promises don’t mean a thing until the actual policies on the ground reflect the change,” Chitam said.

Other notable actions include Biden’s choice of Alejandro Mayorkas as Secretary of Homeland Security, who is himself an immigrant from Cuba and is the first Latino in that position. “Having the first immigrant to lead this department makes a huge statement. For someone to have the lived experience is invaluable,” Brown said. ILAP also is pleased that the bill changes the dehumanizing “alien” to “non-citizen” through immigration law.

These executive actions and what’s contained in the bill are a good start, Brown said, though previous presidents have tried – and failed – to pass comprehensive reform. “Really it comes down to our priorities being for the Biden administration to not go back to the way immigration was before Trump took office, but to build a new, welcoming immigration system.” She is hopeful about what Biden wants to accomplish. “He ran on this as part of his campaign. It makes sense for the country because the immigration system is broken beyond repair and it needs to be reimagined, and that’s what this would do, in some ways.”

Both Brown and the ACLU’s Emma Bond credit grassroots work on these issues. “Polls show that the American people want this,” Brown said. “Now it’s about getting through to the legislators and making them realize that this is good for the country and it’s what the voters want.”