The phenomenon of refugees fleeing persecution and violence and rebuilding their lives in  Maine is not new. However, the sheer number of people who arrived all in one week – close to 300 African-born asylum seekers in Portland between Sunday, June 9 and Tuesday, June 18 – is a first for Maine, and has galvanized public attention both within and outside the state.

The majority of the newcomers arrived in family groups, with young children in tow. Most said they are from the Democratic Republic of Congo or Angola, and that they flew to South America to escape violence and persecution and then traveled – often on foot – through many countries over a period of months, before reaching the southern border of the United States. The majority speaks Portuguese, French, or Lingala, and very little English. However, according to Beth Stickney, Executive Director of the Maine Business Immigration Coalition (MeBIC), the new arrivals are eager to learn. “Individuals who arrived in the U.S. less than two weeks ago are already trying to learn English and are happy to practice the words they have learned so far,” Ms. Stickney said.

Most traveled to Portland by bus. According to two family shelter employees who were at the Greyhound Station to meet and transport arrivals on the afternoon of June 12, many arrived so exhausted that they fell asleep almost immediately, right in the lobby of the family shelter, before being moved to the Portland Exposition Building.  The City of Portland is temporarily housing people in the Exposition Building as a makeshift shelter. 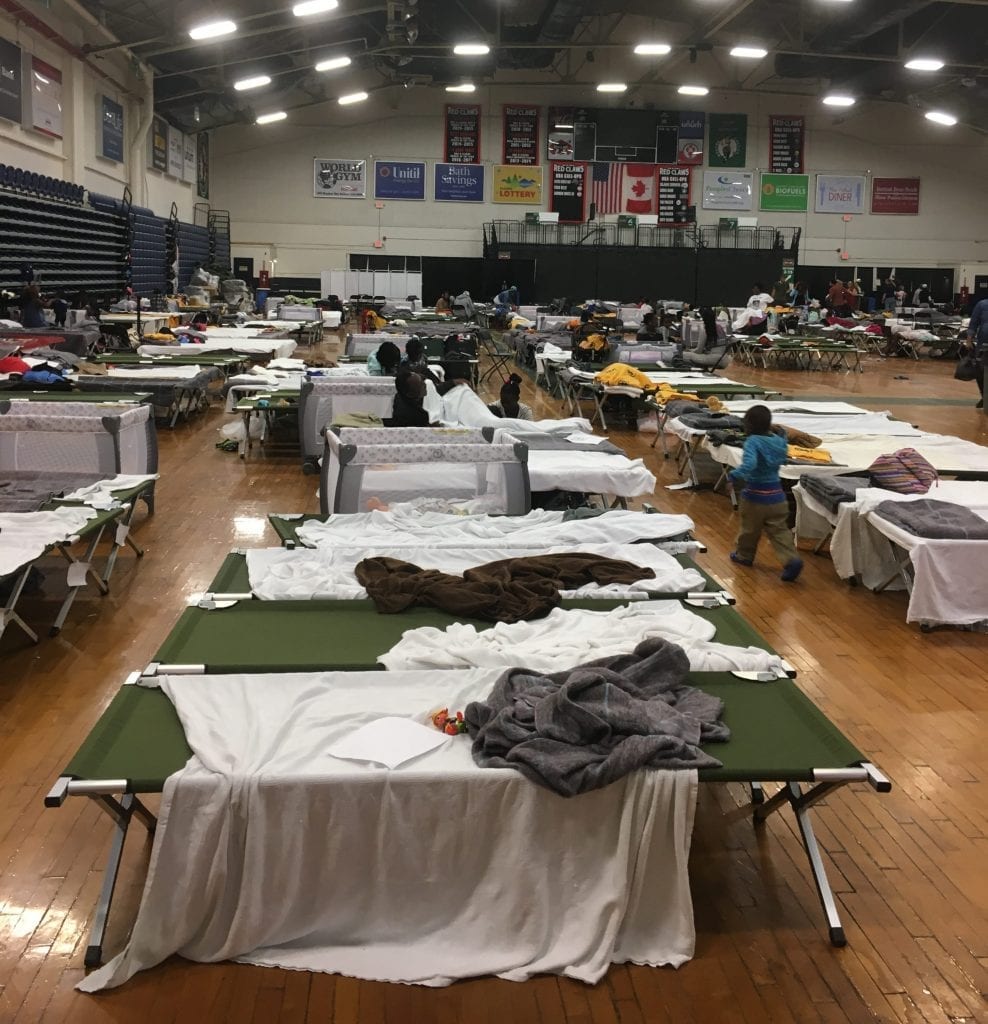 Jessica Grondin, Director of Communications for the City of Portland, said that as of Tuesday, June 18, a total of 223 people, in 87 family groups, were staying at the Expo. Since their intakes, some 70 people have moved on, most likely either to stay with family and friends, or to continue on to Canada.

Catholic Charities Maine Refugee and Immigration Services (RIS) reports that in the 40 years since Maine became an official resettlement site, “RIS has assisted nearly 10,000 people through its resettlement program and assisted over 20,000 with refugee and asylee support services.” According to the Immigrant Legal Advocacy Project (ILAP), Maine’s only immigration legal services organization, there are “4,000-plus individuals currently estimated to be seeking asylum in Maine.” As of February 2019, approximately 2,000 African asylum seekers in Maine were waiting to have their asylum cases heard at immigration court in Boston.

Governor Mills has responded to the arrival of the African asylum seekers by pledging the state’s support. At a meeting at Merrill Auditorium on Friday, June 14, she said, “This is not a political issue. This is a humanitarian issue.” She noted that the families housed at the Exposition Building are “People. People who need our help. People who are fleeing violence, cruelty, bloodshed.” Congresswoman Chellie Pingree, Democrat from the 1st District, was also at the meeting. In addition to encouraging a humanitarian response, she emphasized that the current arrivals present Maine with a wonderful opportunity to develop the workforce. “Maine is ageing fast,” she half-laughingly reminded those in attendance. “Without the alternative of Mainers having more babies really fast, we need newcomers!” 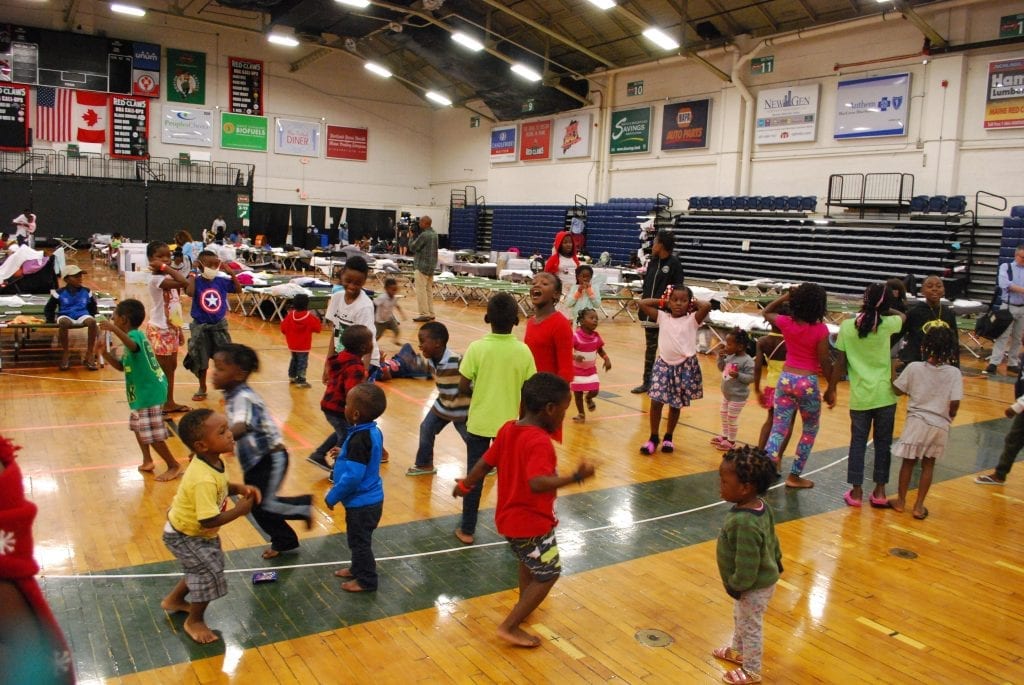 Ms. Stickney stressed the potential of these new arrivals to help Maine down the road. “These asylum seeking individuals are all of working age, and can’t wait to become productive, even though federal law will prevent them from getting work permits for more than a half-year, unfortunately,” she said.“In every Maine county but two, there have been more deaths than births for several years running, and net population loss.”

Maine’s newest residents have received a warm welcome from both local and foreign-born Mainers. As of Tuesday, June 18, the City of Portland had received close to $400K in donations. People from more than 30 states and over 226 Maine towns have sent donations by  text to donate to program set up by the City. One thousand people have signed up to volunteer, with the help of United Way. Over 50 new Mainers have volunteered to serve as cooks or interpreters. Kristin Chase Duffy, head of marketing at United Way, said, “We’ve had such an incredible outpouring of support. We are so thankful.”

Mayor Ethan K. Strimling of Portland, opening Friday’s meeting at Merrill Auditorium said, “It takes a village … and it is remarkable to see how our village has risen up. It’s been an incredible effort.” He was speaking of the hard work of city and state employees in meeting the immediate needs of the African asylum seekers, as well as of the efforts of nonprofit organizations, individual citizens, and Maine’s established immigrant community.

Maine Immigrants’ Rights Coalition (MIRC), an immigrant-led coalition of 57 member organizations, stepped up to the plate, even before the first families arrived. Led by Executive Director Mufalo Chitam, MIRC coordinated donations of time by volunteer interpreters, most of whom were immigrants themselves, as well as donations of in-kind goods ranging from clothing to diapers. MIRC has formed committees to handle financial management and fundraising, supplies and donations, legal and interpretation services, food, and the special needs of women and children. Speaking of the efforts of MIRC members, Ms. Chitam said,  “This is our work and our mission’s platform. We are where we are because, when we all came to Maine, someone here went out of their way to help us.”

Knowing that food tastes reflect the cultures people are raised in, and hearing that the children at the Expo were having trouble adjusting to the mac and cheese and bagels they were being served, and were going hungry, MIRC’s food committee has been coordinating volunteers in the immigrant community to get together and cook African food for the newcomers. According to all accounts, this initiative has been a hit with the temporary residents of the Expo. In addition, MIRC has set up the Maine Immigrants’ Rights Community Plus Fund for the new arrivals. The Angolan Community of Maine and the Congolese Community of Maine have also set up GoFundMe fundraising accounts for the new arrivals. All funds raised will be used to support the recent immigrants. 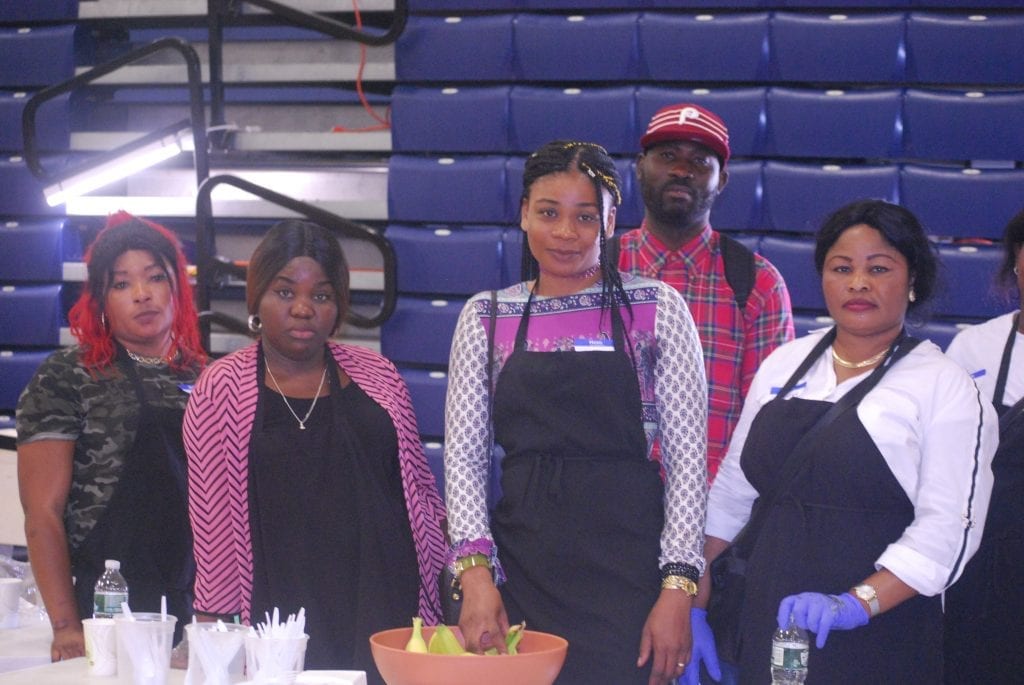 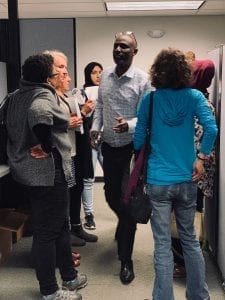 At the Merrill Auditorium meeting Governor Mills emphasized that Portland was not going to be left on its own to integrate the new arrivals, though she has not yet shared what the practical response of the state will be. She said, “It’s not just an issue that Portland is going to deal with alone … I urge other communities to step up to the plate and contribute their assistance, as well.” The South Portland City Council has already done just that, having voted on June 19 to allocate up to $40,000 to the Immigrant Legal Advocacy Project to help the immigrants with legal fees as they apply for asylum. According to the American Immigration Council, “Immigrants with attorneys fare better at every stage of the court process.” Westbrook is considering whether – and how – to help.

Portland City Manager Jon Jennings announced June 19 that the city is focused on “finding and providing more long-term housing solutions.” Ms. Grondin noted in a June 19 news release that at an emergency meeting of the Greater Portland Council of Government’s Metro Regional Coalition (GPCOG), “members of (Portland’s) neighboring cities and towns agreed to work with local developers and private property owners to find vacant apartments or suitable empty facilities that could house 100 families. GPCOG will also coordinate the creation of a program that will allow families to host asylum-seekers in their homes.”

Some cities outside the Greater Portland area might also serve as future homes for the new arrivals from Africa. Augusta’s city manager, Bill Bridgeo, indicated his city might be open to receiving some asylum seekers. Mr. Bridgeo said, “Augusta has been blessed in recent years to have the support and services of the Capital Area New Mainers Program (CANMP), a group of dedicated local volunteers whose mission is to assist immigrants who have come to the greater Augusta area. Augusta currently has a robust community of folks who have immigrated here in recent years from a number of locales, including the Middle East and Africa. Currently about 6% of our school population are ELL students. We take pride in the welcoming nature of our community and the success that we have had in helping our new Mainers acclimate and prosper. Resources permitting, I expect that will continue.”

Laura Supica, city councilor from Bangor, sees potential for expanding the workforce in Bangor, though she also notes obstacles of infrastructure. “I would absolutely discuss welcoming asylum seekers on a city level, and I absolutely believe asylum seekers and immigrants will (and do) contribute positively to our work force here in Bangor. I consistently hear from city staff and employers that we don’t have enough people to fill jobs. I continue to push the city to find solutions by examining and addressing two major workforce problems we have: a shortage of affordable housing, and a bus system with limited hours.” 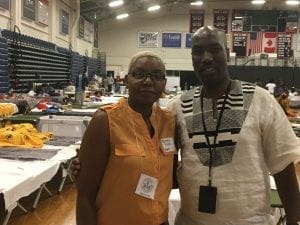 Rockland’s city councilor, and former mayor, Valli Geiger, agreed with Ms. Supica that housing is a major stumbling block for towns that otherwise might like to welcome the newcomers. She was pessimistic that Rockland would work as a location. Ms. Geiger said, “We have not had this discussion [about whether to welcome some of the asylum seekers as residents] and are unlikely to, until we find a way to handle our severe housing shortage and housing affordability issue. We are at a 1.6% vacancy rate, which is essentially zero. My understanding is that 200-plus people are on the waiting list, just to get into the homeless shelter in Rockport.”

One of the biggest challenges for the newcomers will be facing immigration court. Asked to weigh in with advice, Julia Brown, Esq., Advocacy and  Outreach Attorney at the Immigrant Legal Advocacy Project (ILAP), said, “People seeking asylum should only have an immigration attorney help with their asylum case. The Immigrant Legal Advocacy Project will be providing legal information and resources to newly arrived families, so look out for flyers from them or check their website at www.ilapmaine.org.” 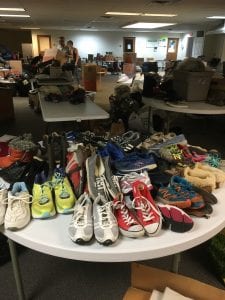 Donations for the asylum seekers were collected at Gateway Community Center.

To make a donation to the City of Portland to help provide for the needs of these recent arrivals, text “EXPO” to 91999.

To make a donation to the Community Plus Fund, which is sponsored by the Maine Immigrants’ Rights Coalition, and dedicated to the new arrivals, visit https://www.maineimmigrantrights.org/

To make a donation to the Maine Initiatives Solidarity Fund go to: http://bit.ly/SolidarityME  This fund will pool donations in support of the key immigrant-led organizations on the ground doing crucial work at the Portland Expo Center: the Maine Immigrants’ Rights Coalition (MIRC), the Congolese Community of Maine (Coco Maine), the Angolan Community Association-ME, and Gateway Community Services.Support the Solidarity Fund. 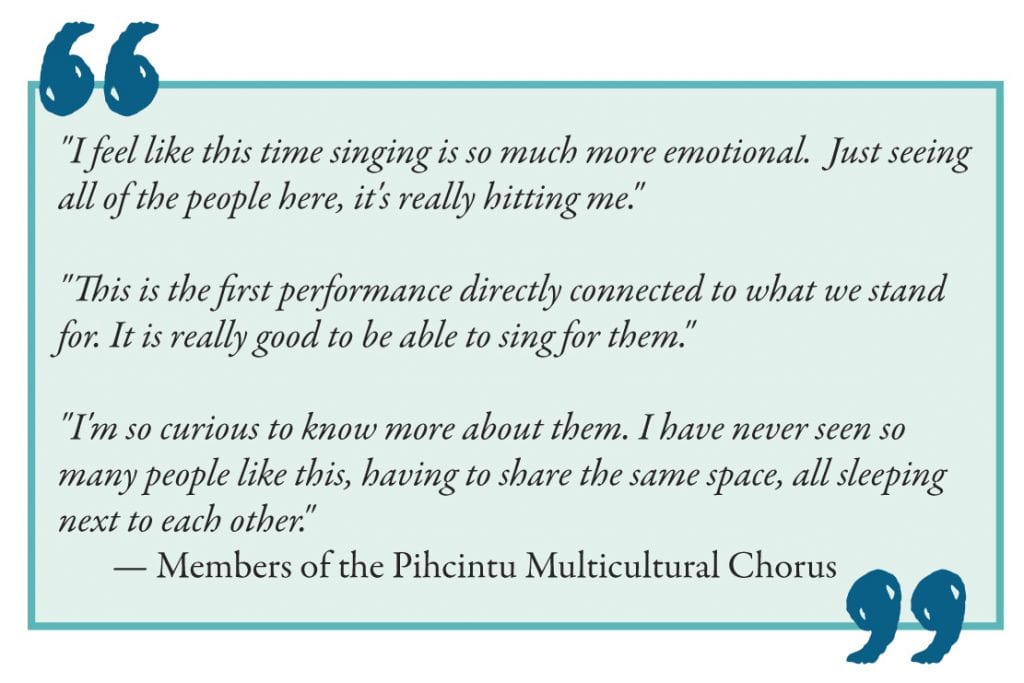 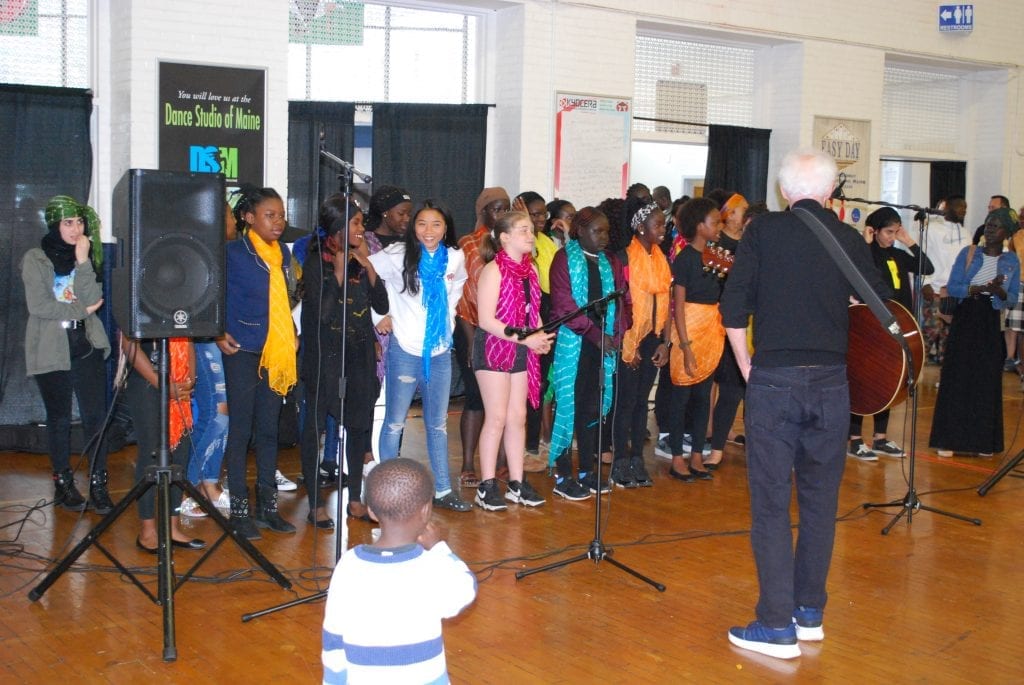 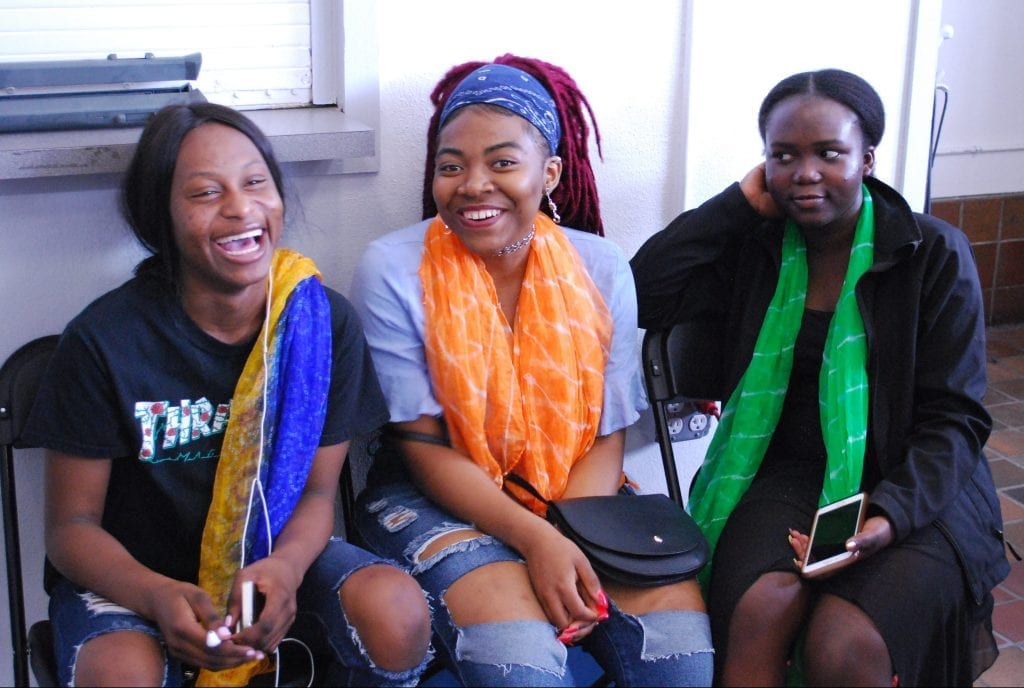