Axels Samuntu to Represent Portland Adult Education on School Board 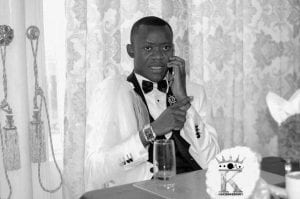 Axels Samuntu, originally from Kolwezi, a small town in Katanga Province, DR Congo, will serve as the first-ever Portland Adult Education (PAE) representative to the Portland School Board. He was elected on November 6 by the student body at PAE and inaugurated December 3 at City Hall in Portland. Mr. Samuntu looks forward to bringing the perspective of immigrants to the table in city-wide discussions of education. He stresses that many of the students at PAE are parents of children in the public schools, as well as students themselves, so they have a big stake in the education system of Portland.

Mr. Samuntu is no stranger to leadership positions. Educated as a doctor in DRC, he was the president of the student body of the Mbujimayi Official University for two terms before receiving his degree in medicine and moving to the U.S. in 2016 on a diversity visa. He is also the CEO of the Axels Samuntu Foundation, which focuses on human rights in relation to health. He left DRC to escape war. He says that for him, and for other immigrants who have fled war-torn areas of the world, money is not what they most seek in their lives here in Maine. What they are looking for is peace.

Mr. Samuntu has two main issues he wants to bring to the Portland School Board for starters, and he also plans to meet with different communities at PAE to find out what issues they would like to raise. He plans to note the need for more resources to be allocated for PAE. He says that there are more than 4,000 students who attend PAE, and that there are waiting lists for English Language Learning (ELL) classes. Students sometimes become so discouraged while waiting for a place in a class that they give up. This is an economic loss for Maine because immigrants who can speak English are able to fill positions left vacant by Maine’s aging population. He also wants to share the need for more specialized ELL courses for skilled immigrants who arrive without adequate English, but with other training in fields such as engineering, information technology (IT), accounting, plumbing, electrician, and health care. These skilled PAE students need field-specific classes to help them move quickly into the work force in Maine.

Mr. Samuntu himself is an example of someone who arrived as a skilled professional. Even though he was a doctor and spoke French, Swahili, Lingala, and Ciluba, he did not speak English. He took ELL classes at PAE, as well as classes in U.S. History, English Language Arts, and Cyber Attack. Then he received a scholarship to attend Southern Maine Community College (SMCC), where he studied for a certificate as an Emergency Medical Technician (EMT). Now he is employed as a House Manager at Port Resources, where he works with people with disabilities. The transfer of educational credentials is a huge issue for immigrants, which is why Mr. Samuntu is not working as a doctor at the moment. He is studying for his General Equivalency Diploma (GED), which he will receive in June. Mr. Samuntu emphasizes the importance of learning English. He can be contacted at: [email protected]