Another uncommon April: Reflections on COVID-19 and the genocide against the Tutsi 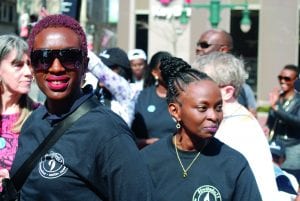 When the news started reaching me in mid-March of school closures and businesses shutting down, my head started to spin faster than the wheels on a bicycle. April was approaching, the darkest month in the year for me, the mourning period for my family who were was massacred in the genocide against the Tutsis in Rwanda in 1994. April is Kwibuka time, when people from my culture gather together to “Remember, Unite, Renew.” I was among a group of mothers planning sessions for children in preparation for the 26th anniversary of the genocide. A commemoration was to be held in Portland. In fact, our first meeting with the children was scheduled for the week everything shut down.

When my three boys heard the news about school closing, they asked if I had ever lived through a time of social isolation before in my life. I told them I had, during the time of the genocide against the Tutsi. One difference now is that we are isolating through fear of a sickness, not fear of violence from our neighbors. Another difference is that COVID-19 strikes everyone equally. In Rwanda, danger came with one ethnic group attacking another. It was about being Tutsi. But the virus does not discriminate. Everyone is on the same level this time. It is a reminder that we are all equally human, a reminder of our common humanity.

When the genocide started, propaganda was spread, riling up the population and telling the Hutu that there were differences between Hutu and Tutsi. Officials started excluding Tutsis from meetings. We were excluded so that we would not know the murderous plans that were being formed to kill Tutsis. People who had been friends and neighbors used to come and stand outside our huge compound, looking in at us as if something was wrong with us, as if we were sick. We stayed locked in the house, isolated. We had no information about what was happening locally, only a small radio where we could listen to national news. When the Stay-at-Home order was issued in Maine, I felt exactly the same as when we were isolated in our homes in Rwanda without information.

But this time social isolation is happening for a good reason, to save us. I compare each day of April 1994 and April 2020 and do my best to talk about it to my boys. It’s like I am living through two different periods at the same time. I remind myself constantly to feed my faith, starve my fear, stand strong for my three sons, tell them my story, and teach them the history of the Rwandan genocide.
My early morning thoughts come in different forms, and how I deal with these daily inner conversations is something I have to work on all the time, from the time I wake up, until the time I sleep again. This April 2020 is leaving a powerful mark on us again.