PORTLAND, Maine — If you asked Jean Pierre Akayezu a few years ago how things were going in his new life here, you wouldn’t have gotten the whole story.

The 35-year-old Rwandan immigrant was enjoying the people he met in his new city and picking up a lot of English during his conversations with them. He also had become a new father. But he wasn’t psyched when the topic shifted to work. 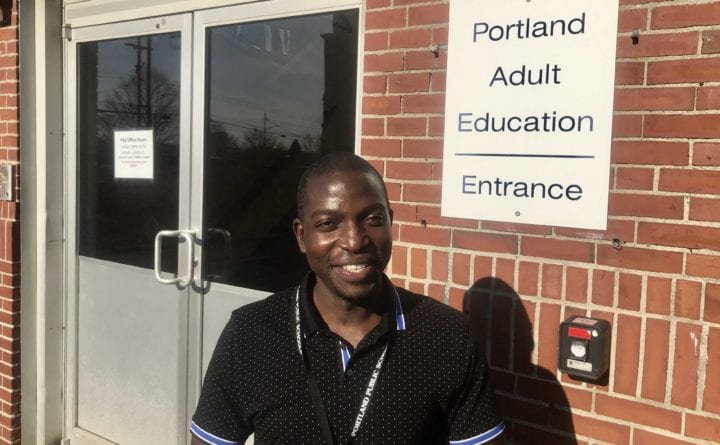 “Back when I was doing housekeeping, if you asked me what I did, I would say, ‘I do just a job. It’s to pay my bills,’” Akayezu said.

He arrived to the states with a teaching degree from the University of Rwanda’s College of Education and was fluent in five languages, but Akayezu’s first work experiences in Maine were a series of unfulfilling odd jobs.

It’s a different story now. Akayezu is among the first class of graduates from a new academy that re-introduces foreign-trained teachers into jobs in their city’s school systems. He’s already found work here in the same system that educated him, helping other immigrants find similar paths.

The Education Academy, a program developed to assist the entry of foreign-trained teachers into teaching and other positions in Maine, graduated 11 students last year after a rigorous course from January to April. All of those graduates are working as ed techs in the Portland Public School system, and on their path toward teacher certification.

About four years ago, the Portland Public School system launched TeachPortland as a summer program to help train future educators alongside their Portland Adult Education program. That initiative partnered with the New Mainers Resource Center and jointly launched the Education Academy last year.

Many school districts in Maine are striving to diversify their workforce so that it more closely mirrors the make-up of their student bodies. In Portland, that goal was outlined in the Portland Promise, an initiative of goals and values drafted by Portland Public Schools in 2017, when Superintendent Xavier Botana identified the imbalance between a 97 percent white teacher staff and a student body comprised of 40 percent people of color.

A Portland Public Schools director said the objective is still to hire the best teachers, and that the program helps ensure that those candidates are qualified.

“When you look at the research, there are benefits to students of color and white students both of seeing diverse educators in front of them,” Portland Public Schools Human Resources Director Barbara Stoddard said.

“Given the fact that almost half of our students are students of color and our staff overall does not match that, we and the other districts across the country have a moral obligation to do as much as we can to work on that,” Stoddard said.

While other Education Academy graduates are now working with those young people in Portland schools, Jean Pierre teaches adults. The former high school teacher became a U.S. resident years ago after a long process of seeking asylum, and spends his days teaching a job class for immigrants at the Portland Adult Education and the New Mainers Resource Center. He helps them with their resumes, sets them up with interviews and stays in touch to see that things go smoothly in their new roles.

He also works to get word out about the program, a critical first step.

“Most immigrants tell me they just need a job right now — any job,” Akayezu said. “But if you’re trying to help them the right way, to go back into their careers, what they need most is information. So many people don’t even know about this program.”

The Education Academy is subsidized in part from various training resources — Workforce Solutions, Friends of Portland Adult Education and a Competitive Skills Scholarship from the Maine Department of Labor, said Sally Sutton, the program’s coordinator.

Sutton designed the program with assistance from the Portland Public Schools’ human resources department, who offered assistance for the curriculum based on correspondence with area employers.

Though they may be highly educated and have considerable experience, new Americans tend to be unemployed or underemployed at a higher rate than the rest of the population. Approximately 2 million college-educated immigrants across the U.S. are trapped in low-skilled jobs or unemployed, according to the Migration Policy Institute.

Formed in 2013, the New Mainers Resource Center helps to train these newcomers as part of the solution to Maine’s population decline.

“Natural population growth (births) and in-migration from other states will not provide enough people to meet the current labor demands, let alone address the need for economic growth,” according to a report from the New Mainers Resource Center issued in January. “These students need a different type of support due to their prior education and training if they are to reach their full potential.”

In the field of education, that support comes from breaking down barriers and challenges that foreign-born teachers face to work in public schools, such as English proficiency, navigating the state-certification requirements and familiarizing themselves with the pedagogical differences in American classrooms.

“When I was doing my practicum, I loved going around to different classrooms to see how they were managed,” Akayezu said.

Prior to graduation, all 11 graduates of the academy had their foreign degrees evaluated on behalf of the Maine Department of Education, which authorized each of them to work as an educational technician 3.

After a few tweaks, the Education Academy has resumed, and is now in session teaching a class of another dozen future teachers. Lewiston Adult Education has launched a similar program.

For Akayezu — who now has a second newborn child at home — and the growing number of skilled immigrants who are itching to do what they love, it has made a world a difference.

“When you make the switch, you don’t feel like you’re a loser for the years you spent in college,” he said. “Now I see my degrees valued and I feel happy.”