African Union Ambassador to the U.S. Dr. Arikana Chihombori-Quao says Africa to enter world market as ‘Africa’ instead of 55 countries

“The sleeping giant that is Africa is now rising,” proclaimed African Union Ambassador to the U.S. Dr. Arikana Chihombori-Quao to an attentive audience at an event sponsored by the World Affairs Council of Maine in Hannaford Hall, Portland on September 13. 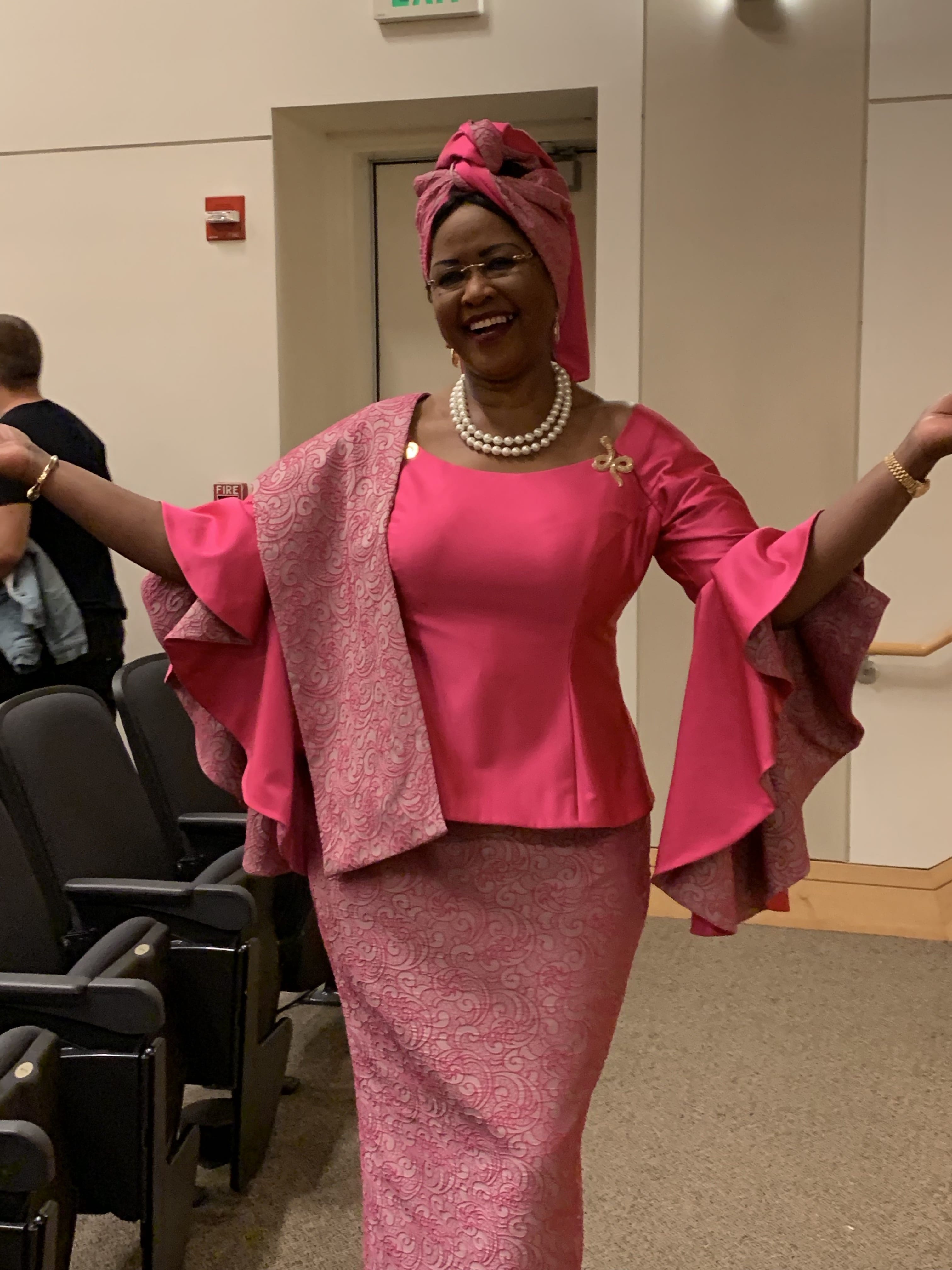 Dr. Arikana Chihombori-Quao was resplendent in a pink gown made by fashion designer Adele Masengo Ngoy of Portland

The occasion was a Portland talk sponsored by the World Affairs Council of Maine, which capped the ambassador’s September 12-13 visit to Maine. She had been invited by Portland City Councilor Pious Ali.

“I first met Her Excellency Arikana Chihombori-Quao at the New American Leaders annual conference in December 2018,” said Councilor Ali. “I have always wanted to bring the African Diaspora community in Maine together to build a community, and was looking for an opportunity. We had an amazing few days.”

Ambassador Chihombori-Quao’s visit was busy. On Thursday, she met to discuss possible collaborations with the University of Maine, University of Southern Maine, Thornton Academy, Global Tides Consulting, and Idexx. That evening, African Americans, Africans in the Diaspora, and the ambassador shared a meal and conversation.

Councilor Ali noted that the gathering, which brought together recent African immigrants and descendants of Africans who were brought here unwillingly generations ago, was unusual in Maine, where the two communities frequently don’t mix. He expressed hope that the gathering will not remain unique. On Friday, the ambassador visited Deering High School.

On Friday evening, after a pointed and succinct overview of the history of colonization in Africa and the continued exploitation of the continent’s natural resources by multinational companies and foreign governments to the present, the ambassador described the change that is at hand. “After a long pregnancy and many years of intense labor, a baby has finally been born, and the baby’s name is the African Continental Free Trade Agreement. We need to raise her carefully, and help her to grow and mature,” Ambassador Chihombori-Quao said. “All 55 countries in Africa have come together around the agreement, which was brokered by the African Union and ratified in March 2018. We are finally speaking with one voice. It is the monumental decision that we have needed to make for over 700 years – since the first colonizers came to Africa – to take her rightful place on the world stage. Beginning in July 2020, Africa will enter the world market as ‘Africa’ instead of 55 countries.” 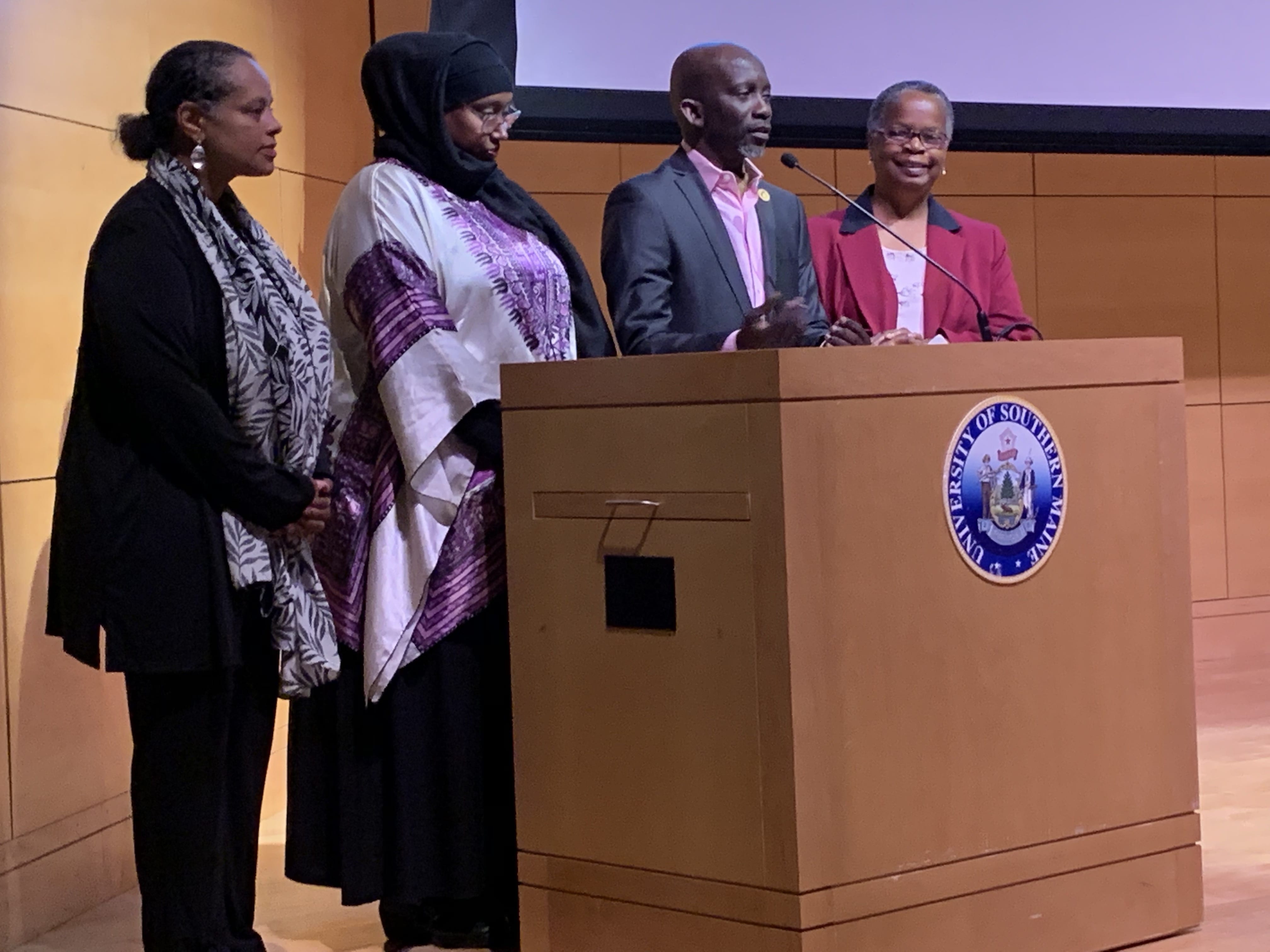 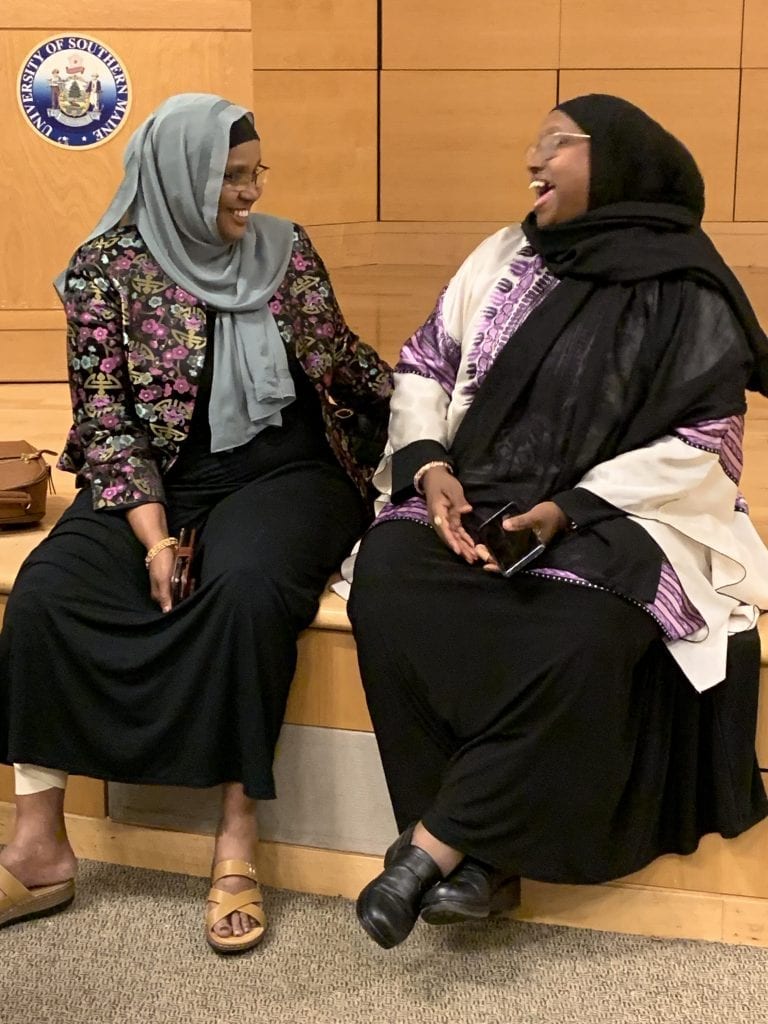 With fashion designer Adele Masengo Ngoy of Portland and her daughter 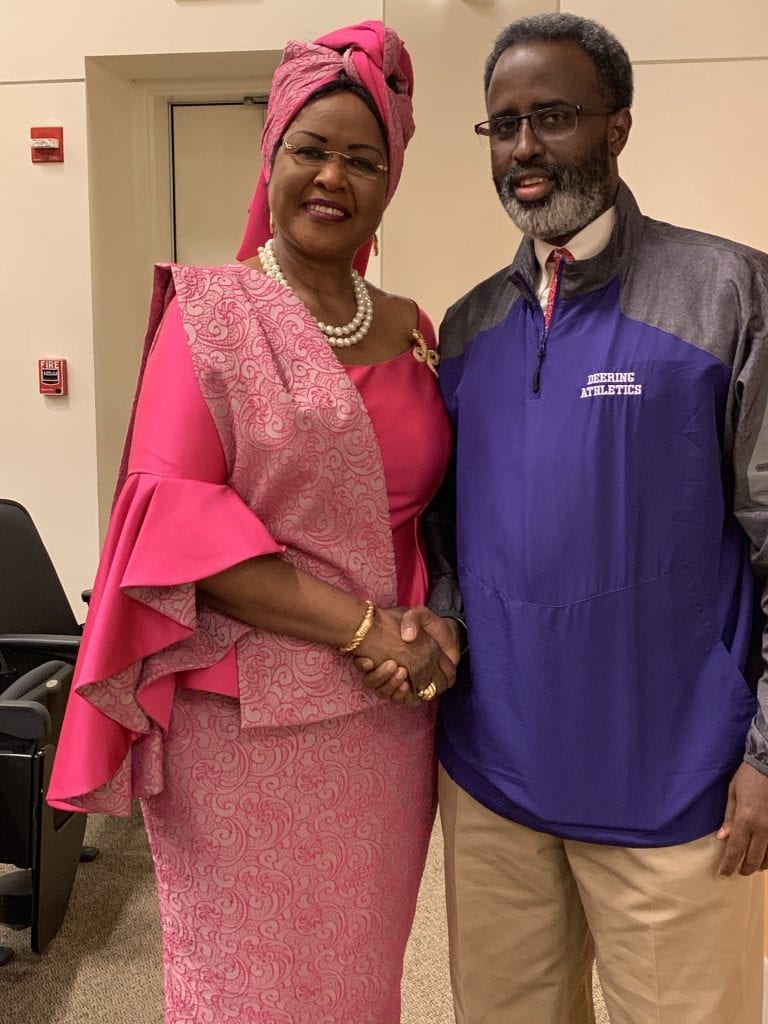 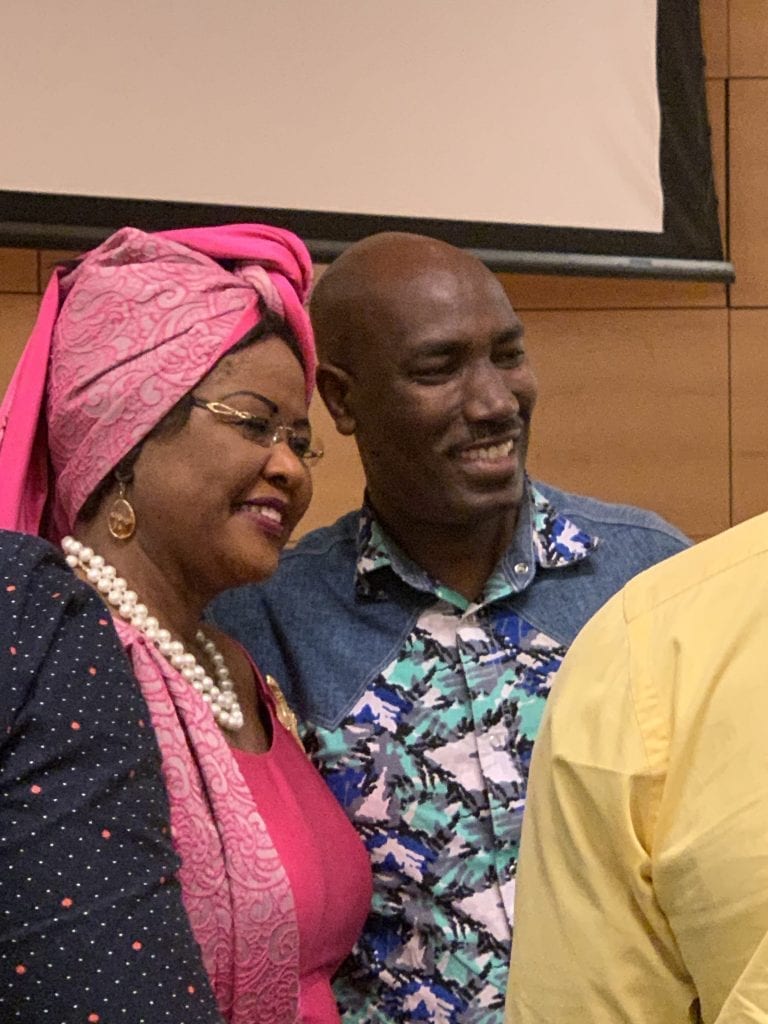 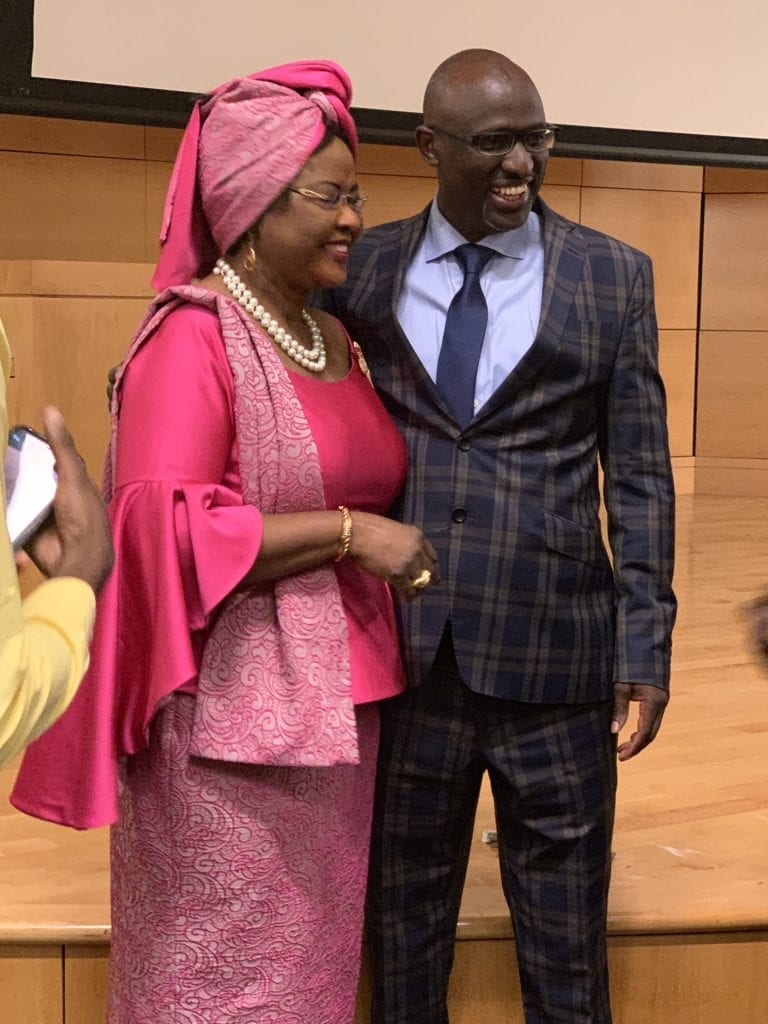 After Ambassador Chihombori-Quao called the African Continental Free Trade Agreement (AfCFTA) a game changer. The historic agreement will enable African countries to compete with major regional economies, something that individual countries have been unable to manage alone because of their small size and relatively small economies. AfCFTA will allow African workers to work anywhere they would like on the continent, will move goods across national borders without delay, and will open up tourist and business travel within the continent.
“At the moment, African countries are wanna-be boxers, constantly thrown into the ring with heavyweights,” she continued. “West Africa produces 65 percent of the world’s cocoa, for example, but only last year started to manufacture its own chocolate bars. People rightfully talk about the corruption of some African leaders, but if we’re going to talk about corruption, let’s talk about all the corruption. At least $50 billion leaves Africa each year due to corruption.

“Africa must get out of the losing lane. We need to come together as Africans, and friends of Africa, and understand her from the point of truth, not lies.”

The ambassador urged the American business community to wake up to the advent of AfCTFA.

“Work hard, stay focused, and remember that Africa is your home. Promote your continent by any means necessary, just as other ethnic groups from other parts of the world, who are here in the United States, are doing,” she said. “Good things are going to come from Africa.”

The message of unity from Ambassador Arikana Chihombori-Quao resonated with Abdullahi Ali, originally of Somalia. He said, “I believe the African Diaspora should play a role in building a modern, united Africa. The African Union’s definition of the African Diaspora is inclusive and encouraging – not only recent African immigrants living outside the continent, but any person of African descent, whether African American, Black Latino, those from the Caribbean, or African-born immigrants. The Diaspora can play a role in the democratization, investment, integration, and development of the continent.”

Reflecting on the ambassador’s visit, Portland City Councilor Pious Ali returned to the theme of uniting communities. “Over the years, there have been ups and downs in the relations between Maine’s African American and African immigrant communities. But we aren’t complete until we connect. We are each other’s anchor. And keep in mind that the children of African immigrants growing up in Maine today will be considered African Americans of tomorrow.”’