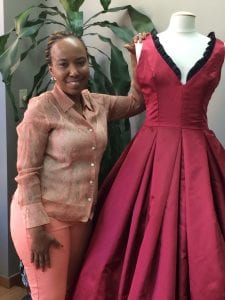 Adele Masengo Ngoy, successful fashion designer, owner of Antoine’s on Congress Street, and founder and president of the non-profit, Women United Around the World, arrived in Portland from the DR Congo seventeen years ago. Soon after arriving, distraught, she returned to the immigration office and spoke to an officer there. “I made a big mistake in coming to America. I want to go back home!” she told the woman – and she meant it. She says now that she was completely overwhelmed by her situation and her new environment. She was a single mother, a refugee fleeing violent ethnic wars, she did not speak English, and she was scared. On top of this she was distressed on behalf of her children, who asked her repeatedly during the first months, ‘Why did you bring us here?’ The immigration officer came out from behind the counter and hugged her. “Just do it for your kids,” she said, and Ms. Masengo pulled herself together and did just that.

In the hopes of inspiring others who may be having a hard time, Ms. Masengo agreed to meet with me and share her story. During our conversation in the comfortable sitting area at Antoine’s Tailor Shop and Formal Wear the petite, elegant Ms. Masenga stressed how much she loves Portland, and how lucky she feels to be living here. She emphasized the welcoming business environment and the way business ‘goes by the book’. Back home, she explained, the leaders are not as good as leaders here. As a result, business people are not accountable to anyone. Sometimes they pay taxes and sometimes they don’t. She talked about her early struggles in Portland, the years working for others and gradually learning the skills she would need to be a business owner in the USA and a leader in the community.

When Ms. Masengo fled the DR Congo she went first to Cameroon, where she stayed eight months before she was granted refugee status. Catholic Charities then resettled her in Portland. Trained as a fashion designer in the DR Congo, where she had also taught designing at the Art college, she arrived in Portland with solid skills. She got a job as a seamstress at David’s Bridal, where she worked hard. After one failed attempt at starting her own business she went back to work for David’s Bridal again, as a manager, and finally six years later she purchased Antoine’s at the invitation of Antoine himself, who was Lebanese and ready to retire.

Adele Masengo has plenty of advice for newcomers to Maine. Be patient with yourself, she says. Expect culture shock. It is normal to feel overwhelmed. Focus on learning English, which is the key to opening doors for yourself and your family. Learn a skill. Try to make friends with Americans – you need their help to figure out how to make it in this new world. This is a place of opportunity, she says, but you are bound to feel frustrated at first. One big challenge is child-raising. “I had to learn to be an American mother and a Congolese mother at the same time.” To learn American customs, she talked to American mothers, asking lots of questions, for example about sleepovers, which is something African children don’t do, and which she did not trust. Some African values she was unwilling to leave behind, such as the importance of showing respect to elders, whoever they might be. “When American children came to my house I insisted they greet me politely, shaking my hand, and saying ‘Hello, Ms. Masengo.’ The children got used to it.” She is thankful and proud to note that her beautiful daughter grew up well-educated and capable and now works as a scheduler for Senator Angus King in Washington, D.C.

In 2011 she founded Women United Around the World, a non-profit with an all-female board that is dedicated to helping women who are New Mainers learn vocational skills and become acclimated to life in the USA. The organization offers mentorships for women in addition to trade skills workshops. The organization’s main fundraising activity is the annual International Fashion Show, held on March 8th, which last year boasted five hundred attendees (the show was sold out one week in advance)! The organization is inclusive of women immigrants from any culture in the world.

“I want to send the message to all who come here that they have a lot to give, and let them know that they can do it,” says Ms. Masengo. Her passion for helping others is evident in the way her eyes shine when she talks about her organization and in her eagerness to share advice for newcomers. “Back home the people are poor and there is a lack of opportunity. We are lucky to be here. We must work hard and help ourselves.”