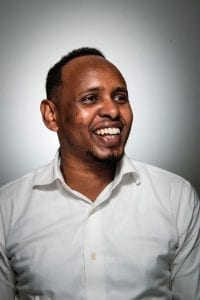 Abdullahi Ali fled war-torn Somalia with his family as a young child and spent much of his early life in one of the world’s largest refugee complexes in Dadaab, Kenya before being resettled to Maine in 2009. Now, a decade after arriving in the United States, he is CEO of Gateway Community Services LLC, an organization he founded in 2015, which provides support for children, adolescents, and adults of all ages and countries of origin at three locations in Portland, Lewiston, and Augusta. The organization offers counseling, case management services, Section 28 services, personal care services, and behavioral health home services. Gateway Community Services LLC specializes in the care needed by immigrants.

Mr. Ali founded the organization in part as a result of his experiences in Dadaab. In the camp, he and the approximately 245,000 other refugees cobbling together a living there, benefited from the extensive help given them by individuals and humanitarian organizations. That model – of service to others — stuck with Mr. Ali, and contributed to his decision to start Gateway Community Services as he found his footing in Maine. “The people who gave didn’t even know me,” says Mr. Ali. “There were schools, health centers – all funded by people who cared even without knowing us, people who gave the little they could.”

When Mr. Ali first arrived in Maine he spent one year working as a receptionist at the General Assistance office in Lewiston, which is where he became aware that mental health suffering caused by trauma and torture is not left behind when refugees begin new lives in Maine – unfortunately, suffering accompanies the person. He became a case manager for survivors of torture, went back to school, and eventually earned a master’s degree and the license he needed to work as a mental health provider.

Gateway Community Services LLC was founded on the premise that in order to be effective, services need to be offered in an environment where people feel comfortable enough to trust their providers. This means that practitioners need to speak the languages of their clients, have some experiences in common with their clientele, be culturally competent in relation to how mental health is viewed in a particular culture, and understand what fears people have to overcome to seek help.

Mr. Ali points to the stigmatization of mental health issues in many parts of the world as a serious deterrent to seeking professional help for the relief of suffering. Because of the resultant shame they feel, people usually wait until they are a danger either to themselves or others before they acknowledge their mental health issues and get treatment. The commonly-held belief is that if you have a problem you must be completely insane, and should be locked up, either by the government, or by your family. Mental illness is seen as a deficiency, and reflects poorly on the family. No one wants to date or marry children from these families, and they are isolated.

Another deterrent to seeking help from professionals is the fear many immigrants have of losing their children to the government. Many people believe that if teachers or others learn they need counseling, the government will decide they are incapable of caring for their children, and they will be taken away. As a result, people hide their problems from others. Gateway Community Service practitioners understand these deterrents to seeking help, and this aids them in earning the trust of their clients.

Mr. Ali speaks glowingly of his senior management team, which includes Krista Hall, LCSW, Clinical Director, and Abdifatah Afrah, Human Resources Director. He says that all his employees inspire him. “They work hard –– I don’t want to claim all the credit – they inspire me!” He also speaks with enthusiasm about the youth who frequent Gateway Community Services Maine, the non-profit arm of the organization that is devoted to youth empowerment. “I see the youth as working hard, dreaming. They have goals, they know what they want, and learning from them and working with them has been an honor for me.”

The non-profit offers a number of programs designed to help youth. There are programs for developing civic engagement, with speaking engagements and trainings held through the year; programs designed to help students navigate the college admission process and prepare for what college will be like; a boys’ soccer team, with a girls’ soccer team in the works; leadership training for youth, including fitness.

Ali says, “I always wanted to get to a point where I could help others. I wanted to work hard, become independent, become reliable, and help others who had been in the same situation as me.” Just two years out of his master’s degree program, and with an estimate that his organization has already served over 1400 people, Mr. Ali has clearly already accomplished more than many accomplish in a lifetime. Asked if he had plans for the future, Mr. Ali sits back, a twinkle in his eye, and nods his head. “My ideas are incubating,” he says. “I keep dreaming.” For now, he holds those dreams tight, but given his track record, chances are we’ll be hearing about them soon.