A shooting star from Sudan 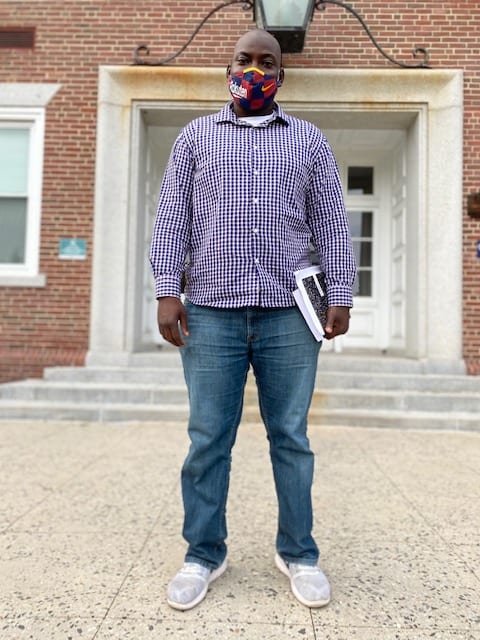 If you have been to a basketball game at Yarmouth High School recently, then odds are you have seen Elamin Kubari on the sidelines. For the last three years, Kubari has been a coach, mentor, and role model to athletes both on and off the court.

Kubari’s journey to becoming a coach began while he was working as a bank teller. “I didn’t know what I wanted to do in life, and a friend of mine had just gotten a job as a varsity baseball coach,” he said. Intrigued, he asked his friend how he got the job. “I learned my friend started as a volunteer,” Kubari said.

Immediately, Kubari sent out emails to several high schools around the Portland area, asking if he might volunteer as a coach. Only South Portland responded. After an interview, Kubari was offered his first volunteer job as a coach at South Portland High School.

After one successful season in South Portland, Kubari was offered a paid coaching position at Yarmouth High School. Elated by the offer, Kubari also felt a sense of loss. “It was hard to leave the school. I loved the coaches and kids at [South] Portland.”

As the head coach of the freshman team in Yarmouth, and assistant coach for the varsity squad, Kubari provides scouting reports for upcoming games. Those reports provide information to help form the team’s offensive and defensive strategies, including key player intel. Kubari believes his scouting reports were instrumental in Yarmouth High School’s success at making the playoffs last season.

Born in Juba, Sudan, in 1990, Kubari moved to the United States at the age of seven. Traveling with his aunt and uncle, his first stop was Jackson, Mississippi. In early 2000, they traveled to the northeast, stopping off in New Hampshire, and eventually settled in Portland.

Living in the U.S. has not always been easy for Kubari. His mother initiated the departure from Sudan, and he has not been home since he left there as a boy. “It’s hard not to see family,” Kubari said. As the youngest of 10, and an immigrant from a country rife with poverty, civil war, and genocide, Kubari has had to work hard to get an education. But 20 years after arriving in Maine, he will graduate this fall from the University of Southern Maine with a bachelor’s degree in communications. In addition to coaching and attending school, Kubari also works full time for the admissions department at the University of Southern Maine.

Although she passed away in 2018, Kubari says his mother will be present in spirit to watch her son graduate. Inspired by her ambitions for him, when asked what’s next, he responded, “Graduate school in the spring, focusing on leadership studies. I just want to make her proud.” Indications are good that he will.