A man on the move 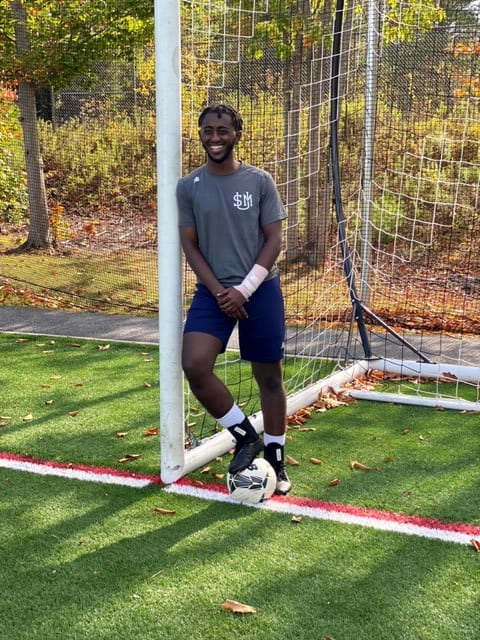 Whether 22-year-old Mazin Ahmed is sprinting on the soccer field for the University of Southern Maine, heading to campus for class, or mentoring other immigrants, it is safe to say that he is one busy man.

Originally from Sudan, Ahmed was only a few months old when he moved with his parents and young brother and sister to Qatar, where he spent his childhood.

In the fourth grade, Ahmed took an interest in athletics and began participating in sports. He immediately emerged as an athlete and started earning recognition. Running always came naturally for him. “I ran track and was faster than all the other kids,” he said.

Opportunity came knocking when scouts showed up at Ahmed’s elementary school and selected him to try out for a track club team. At the try-out, his athletic ability stood out, and he truly separated himself from the pack. After the try-out, he met with the vice president of the club.

“It’s common for the club to ask about your father,” he said, and that’s what happened. Ahmed told the official that his father had played soccer professionally for the organization, meaning multiple generations of the family were part of the club’s lineage.

While running track for the club, Ahmed never felt pressure to pursue professional soccer as a career, although both his father and uncle did. “I didn’t pay any attention to soccer,” Ahmed said. The only time he played in those days was during pick-up games with friends. Over the next three years, Ahmed ran hurdles for the Al-rayyan Sports Club.

Soon another move was on the horizon for Ahmed and his family. In 2012, they moved to Westbrook, seeking asylum in the United States. Ahmed’s first week in the U.S. opened his eyes to the harsh realities immigrants sometimes face. He had learned English in an Indian school in Qatar. “I was in the locker room changing and overheard some racial slurs made by two students,” he said. Startled by his presence, the students realized they were not alone in the locker room and confronted him verbally; however, Ahmed was able to leave the locker room unharmed.

While attending Westbrook High School, he began participating in competitive soccer for the first time. “I was enjoying it, scored some goals,” he said. However, the season would be short-lived for him. On September 21, 2013, Ahmed suffered a broken leg that included a compound fracture of the fibula and tibia bones. He had surgery, and metal rods and screws were put in place to repair the leg. This injury prevented him from walking throughout his entire sophomore year.

By the summer of 2014, he was back on his feet. Over the next two years, Ahmed rose to the top ranks for indoor and outdoor hurdles, eventually becoming the fifth-ranked runner in the entire state of Maine. 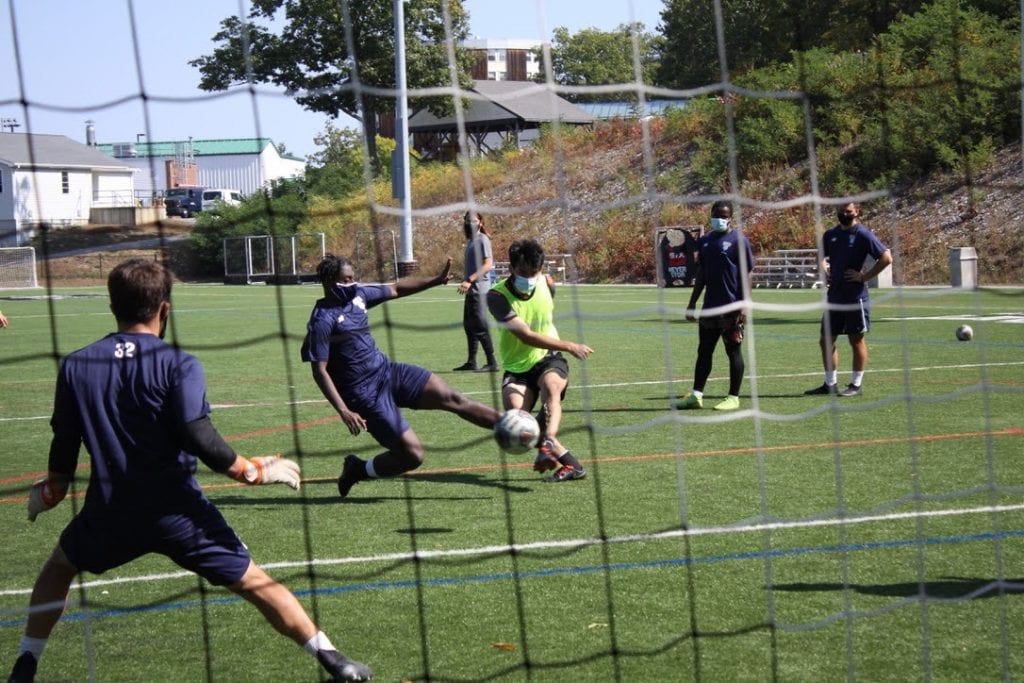 Now in his senior year of college, Ahmed is preparing for graduation in the spring of 2021. His major is Human Biology, and he plans to go to graduate school next fall.

When he is not on the field playing soccer for USM, or in school studying, he is a mentor for Gateway Community Services Maine. At Gateway, he helps other immigrants transition into life in the U.S. His work includes teaching others how to make friends in this culture and understand cultural differences. In Ahmed’s words, Gateway is “an opportunity for the community to support youth.”

Development of youth athletes in the U.S. is drastically different than what Ahmed experienced in Qatar. “It’s pay-to-play in the United States, and while there is financial aid and scholarships, not every club has that,” he observed. The cost of youth soccer varies widely, but often exceeds $1,000 for a single player.

Back in Qatar, athletes are supported by the club teams they represent. Two renowned companies that sponsored Ahmed’s clubs were sports giants Nike and Adidas. They provided equipment, including all training gear and shoes.

Currently, because of COVID-19, the sports season is uncertain. However, Ahmed hopes to have another soccer season. He believes that sports are important as one means of addressing the challenges immigrants face in the community.

“The number one problem immigrants face is implicit bias and ignorance,” he said. “But sports is a universal language. You can play with people from completely different cultures.”