1968, The timeline of a history of symbols

Translation into English by Geneviève Beaudoin

Artist Statement
I don’t do politics, I don’t participate in U.S elections, and I don’t belong to any political party. Still, my art practice is one that is politically engaging, intense, opinionated, and unapologetic. My artwork is both poetic and socially conscious. I create because I dream, just as Martin Luther King, Jr., did in his lifetime. I believe things cannot change unless we dream, but art alone does not create change; change comes from the thoughts, questions, and emotions that art provokes. 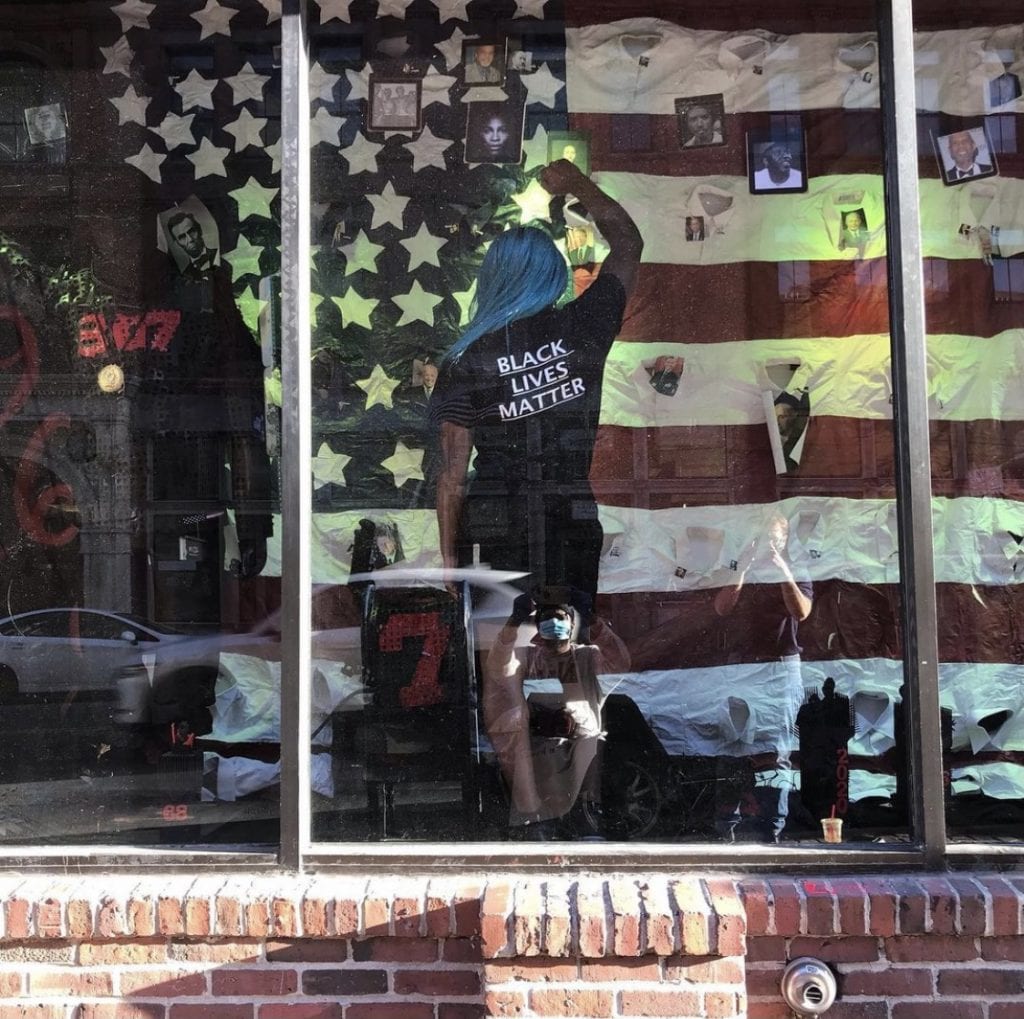 At the 1968 Olympic Games in Mexico, during the medal ceremony for the 200-meter race, Americans Tommie Smith and John Carlos lowered their heads while each raised a black-gloved fist while as the American national anthem played, to show the rest of the world the racism Black people suffered in the United States (the two athletes would later be excluded from the American Olympic Committee and receive many death threats).

In April of that same year, Martin Luther King, Jr., was assassinated in Memphis, an act that triggered a period of civil unrest. In more than 100 cities in the United States, subsequent race riots killed more than 50 people.

More than 50 years later, in 2016, as players and spectators stood up in a San Diego stadium for the national anthem, San Francisco 49ers’ quarterback, Colin Kaepernick, did not move. Instead, he placed his right knee on the ground to call attention to the continued inequalities and racism Black people faced in America (this gesture would cost him his job, as he was blacklisted from the NFL and still unemployed to this day).

Four years later, on May 25, 2020, a Black man in Minneapolis, Minnesota, was murdered by police in the most inhumane way because of a supposed counterfeit $20 bill. This sparked a series of protests and riots against racism and police brutality in the Minneapolis-Saint Paul metropolitan area that spread across the country and then the world. According to a count compiled by the Associated Press, at least 4,400 protesters were subsequently arrested. 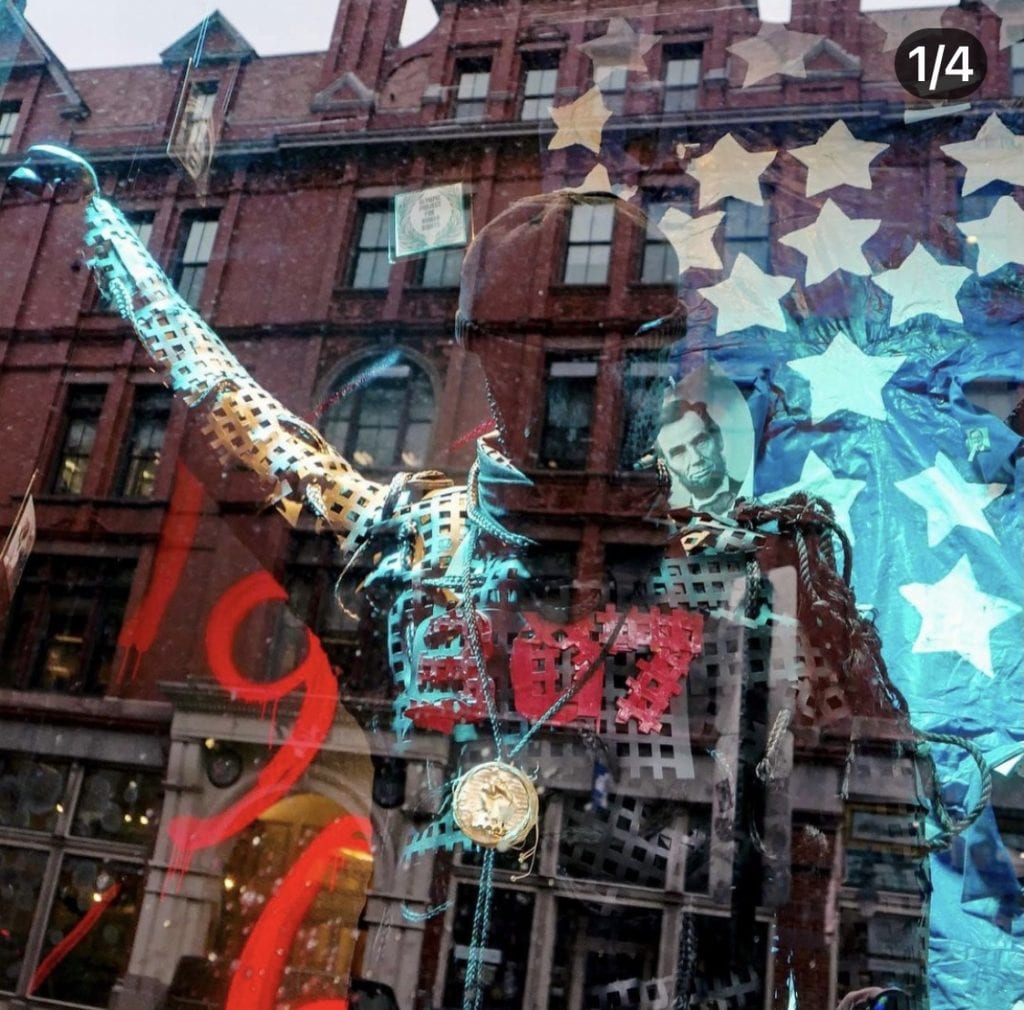 Some months after the death of George Floyd and Breonna Taylor, the United States people elected their 46th president, amidst heightened racial tension and the threat of civil war.

Biography
Titi de Baccarat is an artist who possesses many facets ­­at once: painter, sculptor, jeweler, clothing designer, and writer. Dedicated to justice in a hostile political context, he was forced to flee his country, Gabon, with only the wealth of his artistic ability. He has lived in Portland, Maine since February 2015. He works through his African identity and artistic expertise to contribute to the culture of the city. He believes that “Art rehabilitates love, bringing together people of all countries, of all backgrounds, of all cultures, and all ethnicities.”

In Gabon, Titi de Baccarat’s paintings described the history of the Black Continent. He channeled his experiences of democracy, promoting a culture of peace and solidarity, and denouncing armed conflict and war which have claimed millions of lives in Africa.

In the USA, his collection of ethnic jewelry, made with various materials— leather, wood, and assorted metals— celebrates the beauty and struggle of peoples around the world standing to face their oppressors. His collection of clothing for men and women, inspired by the concept of conjoined twins, consists of 27 designs focused on solidarity and humanity.

His upcoming works will describe his experiences as an immigrant in the United States: his pain, fear, uncertainty, and his hope for his future here.

“Immigration is not a color, it is pain and hope.”

Review by: Veronica A. Perez
This visualized timeline in this mixed media installation in the Space gallery window on Congress Street evokes themes of visibility, access, power, and persistence.

Titi De Baccarat hopes to change the world through dreaming and materiality. This activist’s installation evokes sentiments of the civil rights movements in the 1960s and today – both tumultuous times in our nation’s history.

MLK Jr. & Malcolm X. These men had their own political party and agendas away from the white folx. Because the system is set up to fail Black people, Black men and women have stood up with their own personal political beliefs that differ from the two dominant political parties in the U.S. They had to, and still do, govern for themselves and their people. Black folx have to advocate for themselves because white politicians won’t advocate for them and their community. They want to see folx govern for them. They want to help their communities instead of outside forces coming in to hurt and kill their communities.

The maximalism used in this installation is evocative of the times. There is a mass consumption of media and overload of images – the materiality ranges from torn-up paper, to rope, to fabric, lights, and it all coalesces into black. De Baccarat delves into materials, histories, and emotions.

Black slowly takes over the space of the window, floor, and walls in an elegant reference to the pacifist protests from the 1960s and still today. There are raised black fists throughout the installation – the most static object in the window is stoic and steadfast. Smaller nuances refer to Black men such as Tommie Smith, John Carlos, and Colin Kaepernick, who persist in space.

They evoke for me the slew of newly elected politicians such as Cori Bush, Ritchie Torres, and Mondaire Jones.
A video plays of the protests this summer for George Floyd and Breonna Taylor – against a background of the American flag, flocked with collars and photos of the 45 white presidents. The background, although garishly bright, becomes enveloped by the black foreground.
It signals a new time, a new future. It evokes the change we so desperately need and the vehicle to help us get there. De Baccarat helps us dream of a new world.

Veronica Perez is an artist and writer living in Westbrook. Her website is https://www.veronicaaperez.com